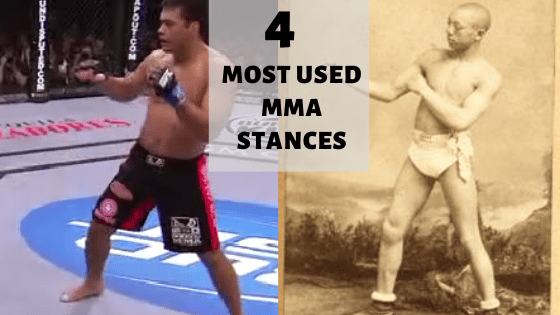 The foundations are the most crucial, and you cant get more foundational than stance. Your stance depends on what sort of fighter you are, a fighter like Stephen Thompson uses a Karate-style stance for example; this allows him to utilize certain kicks to their highest ability.

Whatever your fighting style may be, there is a stance for you. In the following article, we will go over the 4 most common and successful of these used in the sport of Mixed Martial Arts. 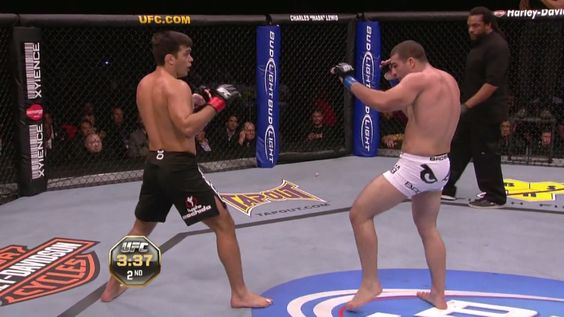 The Thai’s and their damn kicks. The Thai style stance is for any of you brutal fellas who love to blast kicks over and over again. The Thai stance allows for just that, quick kicking and responsive kick defense.

One downside with this stance is you are more susceptible to takedowns, but as long as you keep that in mind you will still be able to consistently defend against them.

The Thai stance can be used in both orthodox and southpaw foundations, usually the power to the rear. Although it may be a good idea to put your most mobile leg in front since you want to be able to quickly attack and respond with it.

For example, Thais like to use quick teeps from that front foot to help with distance management, etcetera, and you need good mobility to successfully execute that technique.

Fighters like Glover Teixeira commonly use the Thai style stance.

Training for this stance might be dangerous if you don’t use protection gear in your sparring.

If you don’t know where to begin , there is a great guide for beginners on how to choose essential MMA gear, take a look at it here. 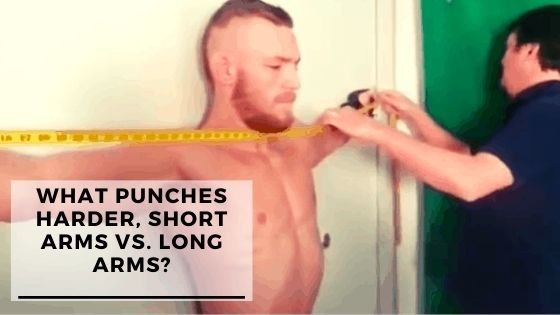 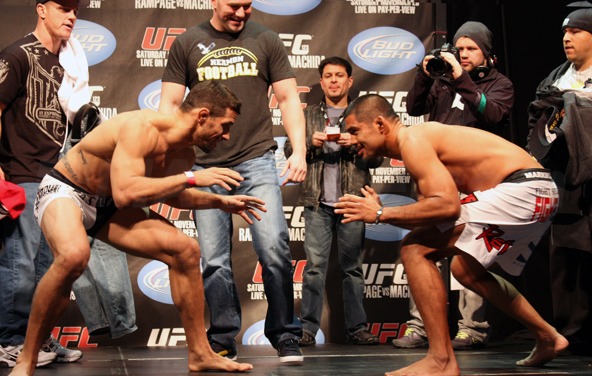 MMA fighters who are mainly grapplers in style don’t use the traditional wrestling stance. Why? Because if you stay that low to the ground with your head forward, you’re bound to get a fist, or worse, a shin to the skull.

The grappling style is much more defensive and helps prevent the opponent from landing big power shots, all the while, increasing the opportunity for you to take the fight to the ground.

Fighters who are mainly grapplers fight much more evasively and many of them utilize oblique kicks, which in turn keeps the opponent at a distance and limits their power potential. An example of this kick being used to its highest ability is in Romero vs Whittaker II.

Although Whittaker is mainly known for his striking prowess, he employed the same concept that most grappling style MMA fighters would; which is to prevent the opponent from launching into explosive striking flurries. Robert Whittaker did exactly that against Yoel, and won a decision victory.

Royce Gracie used this style to launch himself and BJJ into the stratosphere, and a modern fighter who does the same is the great Demian Maia.

This stance is great if you have a longer reach. Counter strikers are much more reactive than proactive. This type of fighter is usually fighting on the outside and is quick in and quick out. They take advantage of the explosive styles, you don’t want to overreach against these fighters or you will be quick to regret it.

This style doesn’t only open the door to strikes though, it also allows for well-timed highly effective takedowns. A great example of this is George St. Pierre. George holds a takedown accuracy of 74%.

How? By waiting for the opponent to strike. As soon as his opponent strikes he perfectly times it and slips underneath. They are very hard to defend due to your weight and focus being on the punch and not on defense.

As a counter striker, you may find yourself as the predictor of the pace, this is where consistent “activity” strikes will come in. A great way to cause an opponent to make a mistake is to annoy them. Learn to efficiently jab, leg-kick, and oblique kick. These can help kick start your opponent’s pace, they may start looking to “get back at you”, and that is exactly what a counter striker wants.

We don’t see the Karate stance close to as much in MMA any longer, but it can still be highly successful if you properly adjust it for yourself. This style allows for you to throw kicks up out of nowhere, and to quickly jump out of harm’s way.

The Karate stance isn’t for everyone, but if you like to hit and not be hit (as much as possible) then this may be a great fit. You’re not going to be throwing as many power strikes, but you’ll hit them with stuff they don’t see coming, and definitely have an advantage in the point game.

A few notable fighters who use the stance are Stephen “Wonderboy” Thompson, and Lyoto Machida.

All the stances mentioned above have two versions each: Southpaw Vs. Orthodox

All of the styles/stances mentioned in this article have all been a variation of the two most foundational stances. These are called orthodox and southpaw. Southpaw fighters are usually left-handed/legged, while orthodox is the opposite. Orthodox fighters make up roughly 70%-80% of fighters. Although, it isn’t uncommon for a fighter to know how to perform in the opposite stance.

Orthodox is when you are fighting with your right hand and right foot forward.

Southpaw is the same, just on the opposite side.

Your stance depends on what side hand you like using and your style is dependent on what type of fighter you are. A karate fighter is usually more evasive and “pop and move”, while a Mauy Thai striker may like to be more in front of you. There are many “styles” but they all have a foundation in orthodox or southpaw.

As you develop your skills in your MMA journey, your style will begin to show itself. For example, if you have shorter arms and a stockier frame, you might want to fight in the pocket (like Tyson). If you have longer reach you may want to play a counter-strike type game, since you can see the strikes coming and have a lower chance of getting hit (in some scenarios).

The most important thing is to not push it. Develop your skills at a steady pace but mold into what fits you and, at the same time, don’t think you’re locked into one style. Everything comes with time and consistent practice. 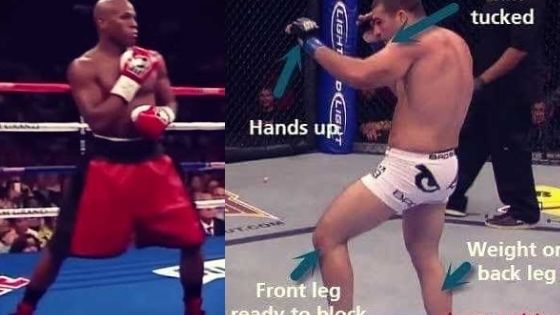 How Long Should I Train Before My First MMA Fight? 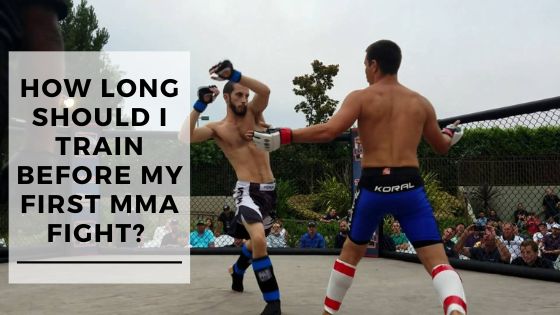