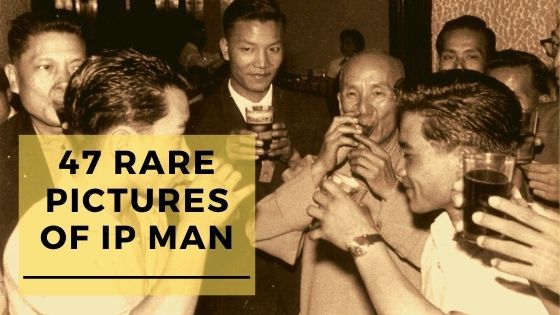 In this article, you will find rare pictures of the legendary Ip Man .

The pictures in this post cover all different aspects of Ip Man’s life.

Wong Long Ching is a direct disciple of Ip Man, he studied under Ip Man for a long time.

Now he owns several Wing Chun schools around the world.

Along with Chu Shong Tin, they are considered the most iconic students of Ip Man, they were the closest to him and they witnessed every single detail of his life.

Ip Ching is the second son of Ip Man, he learned Wing Chun directly from his father.

He later went around the world to spread the techniques and wisdom that he learned from his father.

Ip Chun is the eldest son of Ip Man

He was working as an accountant during the day, and he was learning Wing Chun from his father at night.

Ip Chun later became one of the most iconic figures in Wing Chun.

This photo was taken in Macau

Grand Master Ho Kam Ming is standing beside Ip Man, both watching a student perform the muk yan jong in a public event.

Grandmaster Ho Kam Ming was one of the best disciples of Ip Man, he spent his whole life learning Wing Chun and perfecting his techniques.

Ho Kam Ming was famous for his dedication to the art of Wing Chun, he was always first to be present at the Ip Man’s class and the last one to leave.

Left to right, Ip man with

Ip Man was known for being an openminded man compared to his peers in his time, many martial arts masters refused to teach women martial arts.

Ip Man was very open to the idea of training women for self-defense.

The magazine did an interview with Ip Man where he spoke openly about his personal life, his sons, and his wife.

The interview was very interesting and showed another dimension of Ip Man.

The woman in the photo is the wife of Ip Chun.

Ip Man was known for being a family man, his life revolved around two things:

And because he had a busy life, Ip Man would bring his children with him to the Wing Chun classes so he can spend more time with them, he also would get back home to his wife as soon as the class ends.

Ip Man with his disciples

From left to right, Ip Man with:

Jiu Wan: Wing Chun Sifu who comes from another lineage

Yip Bo Ching: One of the best students of Ip Man, he began studying under Ip Man in the early 1950s.

Ho Luen: One of the earliest disciples of Ip Man

Ip Man drinking with his friends

Although he was a dedicated man, Ip Man was known for his sense of humor amongst friends.

Many of his disciples wrote about his sharp sense of humor in their books.

He was also known for making funny jokes even during the class to lighten the atmosphere for his students.

Ip Man with his two sons

Bruce Lee trained for a while under Ip Man

The cause of Bruce Lee leaving Ip Man is not clear and every historian has their own version of it.

Some say that Bruce Lee felt unwelcomed by Ip Man’s disciples because he wasn’t purely Chinese.

His great-grandfather was born in the Netherlands of Jewish ancestry.

Ip Man’s students found out about Bruce Lee’s ancestry, so their attitude changed toward him and they discriminated against him.

Bruce Lee felt that and left the school. That is one of the most known causes that pushed Bruce Lee to part ways with Ip Man.

Photo of Ip Man with his students

Down to the left is Chow Tze Chuen, one of the greatest students of Ip Man.

Ip Ching was very close to his father, Ip Man’s greatness didn’t prevent him from getting advice from his sons.

He would ask Ip Ching for advice whenever he felt confused about things in business and life in general.

Other pictures of Ip Man