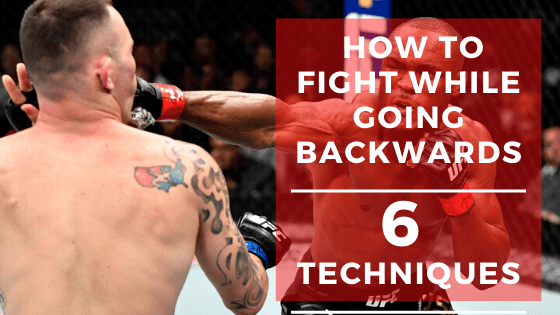 Fighting while going backwards is never fun, it’s very taxing on the body and it does certainly make you gas out sometimes before your opponent does.

You don’t always get to be at the center of the ring or the Octagon, sometimes you have to let your opponent control the center and accept to dance with them.

Before getting to the techniques on how to fight and punch while going backwards, I want to emphasize on the fact that this style demands an endless gas tank and infinite cardio, that’s why Muhammad Ali used to run backwards for miles and miles to adapt his body.

You should never go backwards on a straight line more than two steps, because eventually you will hit the wall, the cage or the ropes. Instead, you should cut angles left or right.

With that being said, let’s get to our list of techniques:

1. Stepping back with a jab

The jab is your first line of defense if you feel pressure from your opponent you can simply retreat with a step back while throwing a jab simultaneously.

Sometimes a jab is not enough to stop an aggressive brawler from charging forward, in some cases you will have to use a stronger blow to make them reconsider their decision of charging forwards.

The cross is the answer, it is considered your second line of defense after the jab, therefore it has more power to inflict damage.

A dropstep cross can also be used as a counter-punch by simply making your opponent believe that they have full control of the center and that you don’t want to engage and lock horns, then surprise them with that sweet strong cross.

3. Roundhouse kick to the midsection

If your opponent is headhunting, odds are their midsection is left wide open for counters. One of the best counters you can throw is a roundhouse kick to the ribs, liver or kidneys.

This is a high percentage counter, your opponent won’t be able to catch the kick since their hands are in the air to punch.

Also, the impact of this counter is very powerful, your opponent runs right to your shin which makes the collision even greater.

This technique can work literally on any opponent. Wait until they make a step forward, then launch your attack while going backward.

It is easy to catch your opponent with a low kick because when they are advancing, all their weight gets shifted to their lead leg.

Also, because of their weight being shifted to their lead leg, the damage you can inflict can be great, and with repetitive crippling low kicks like these, a TKO could easily be on the way.

Some fighters prefer to walk down their opponent while throwing kicks of their own. Conor McGregor is famously known for doing that, he pressures his opponents with kicks until he corners them against the cage.

An effective counter to this strategy is catching your opponent’s roundhouse kick as Muay Thai fighters do.

Once you catch your opponent’s kick, the odds reverse in your favor and your opponent remains at your mercy. Once you have their leg under your armpit, you can literally do anything to them, you can do a sweep and take them down, counter with a punch using your free arm, etc.

GSP’s opponents were always surprised with that well timed takedown finding themselves flying in the air with a big question mark on their face.

Fighting while going backwards is a very dangerous game with serious consequences. If you want to master this style, you will have to be a perfect counter striker and you will have to spend hours and hours perfecting your timing and accuracy.