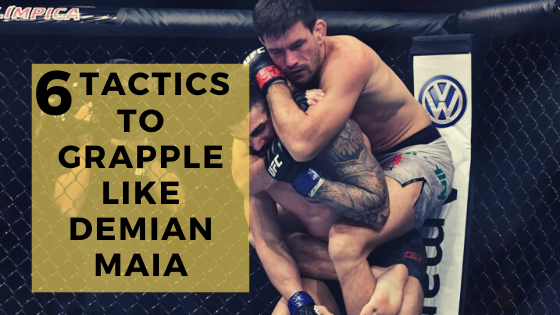 Demian Maia is one of the finest practitioners of grappling and BJJ the world has ever seen. Maia is a four-degree black belt. His takedowns and submissions from the top and bottom give him a huge advantage over many of his opponents and it’s not surprising he’s one of the top five in his division.

Maia has a background in Judo, and we can often see its influence in his entries, throws, and trips. He started training BJJ at 19 years old and made black belt in just over 4 and a half years. It didn’t take long for the UFC community to have huge respect for Maia’s submissions and it’s arguable that his influence raised the whole sport’s BJJ game.

In Maia, we’ve seen an amazing evolution from grappling expert to all-round mixed martial arts’ champion and he has, without a doubt, one of the best grappling and ground games in the UFC. While Maia said he often trained three or four times a day while learning these techniques, if you implement them into your training routine, you’ll see increased percentages in your takedowns and submissions.

In this article, we’ll take a closer look at what grappling techniques you should learn and focus on if you want to use your grappling in fights like Demian Maia.

Here’s a list of the specific grappling techniques that so often give Maia the edge over his opponents. In the earlier days of UFC, these techniques would often come as a surprise to many opponents and we’ve seen nearly everyone in the UFC boost their BJJ and grappling game, most likely down to Maia’s early dominance in the field.

If you want to grapple like Maia, study these techniques and practice them in your drills, sparring, and live fights:

Maia is one of the best takedown artists in the UFC. If you want to grapple like Maia, one of the first techniques you’ll want to focus on is your entries. Many fighters telegraph their entries and end up putting themselves into a worse position, like a guillotine or on bottom, after a failed entry.

So, first of all, let’s look at how Maia avoids this mistake. One of the best ways to avoid telegraphing your entries is by using a feint. A feint is basically a deceptive movement used to draw a reaction from your opponent.

Once you’ve elicited a reaction, this might be a counter or a block, you can drop your level under your opponent’s lead hand and shoot for a single-leg. To improve your entries, try using a jab feint like Maia to open up space for an entry.

Another way you can improve your entries is by waiting until your opponent steps forward with their lead leg. When shooting for an entry, always be wary of guillotines. It’s a good idea to keep your head on the inside to protect your neck.

Maia loves the single-leg takedowns. One of the most common single-leg finished you’ll see him pull is by running the pipe. To run the pipe, rotate your hips and outside leg back and out. This should spin your opponent and put them off balance. Now, you can put pressure on their thigh by dropping your head, shoulder, and chest.

Because all of your opponent’s balance now rests on that trapped leg, their center of gravity is shifted and it becomes a lot easier to take them down. As you continue to rotate and drop your weight, their reduced center of gravity should force them to sit down.

So, to grapple like Maia, try running the pipe off a single-leg entry. One of the benefits of mastering this takedown is the fact that you can use it in open space as well as up against the fence. If you do find your opponent against the fence, use your rotation to move them away from it. As long as they have the fence behind them, they’ll still have two points of balance. To execute a takedown, you ideally want to reduce this number to one. Or zero as you slam them.

Like any entry, you want to protect your neck at all times. Sometimes, you’ll see Maia keeping his head on the outside of his opponent’s hip while he runs the pipe. Try to get into the habit of keeping your head on the inside if you can, pressed up against their stomach or chest. This will help keep guillotines to a minimum.

If you want to grapple like Demian Maia, then you’re going to have to practice your double-leg takedowns. While you can sometimes bulldoze your opponent straight forward, as we see in the clip, often they’ll manage to sprawl and you can end up on the bottom.

So, instead of moving straight forward, try turning the corner. This means rotating your opponent slightly as you push off your outside foot. Driving forward at an angle will help further unbalance your opponent while not giving them an easy sprawl.

Driving at an angle will not only help increase your takedown finishes, but you can actually use your momentum to spiral onto your opponent’s back. Maia’s always looking to take his opponent’s back and you should get into that habit as well. Takedowns are one thing; submissions are quite another.

Sometimes it’s hard to finish a single-leg by running the pipe. It can be especially hard if they’re up against the cage, using it as an extra point of balance. One of Maia’s best techniques for combating tricky takedowns is the trip.

As you sweep your opponent’s foot, just like with running the pipe, you want to circle and rotate while dropping your shoulders, chest, and head. If executed correctly, tripping is a great way to end up on top or to take your opponent’s back.

While digging in with your heel, try rotating your opponent away from the fence and drop your weight onto their unbalanced leg. As you can probably see by now, Maia’s success with trips and takedowns comes from his ability to control, unbalance, and sweep his opponents.

Try practicing tripping your opponent off a single-leg in open space as well as against the fence. Once you get used to using your leg as a hook to sweep their weight-bearing leg, you should see an improvement in your takedown game and you’ll be one step closer to grappling like Demian Maia.

Before we talk about submissions, let’s talk for a second about pulling guard. You’ll see Maia pull guard a bunch against his opponents. While it’s a huge cause of debate in the fighting community, it’s worth mentioning briefly.

The danger of pulling guard is, even if you’re successful, you end up on the bottom. However, some people like it that way and sometimes you find yourself there through no fault of your own. We’ll often see Maia pull guard against an opponent who’s a better striker but not so good at BJJ.

To pull guard correctly, don’t just fall backward. Your opponent can simply disengage and you end up on your back with your opponent simply waiting for you to stand up. Or, a worse scenario is your opponent uses your laziness to pass your guard. Then you’re in real trouble.

So, to pull guard like Maia, first, you want to clinch your opponent and shoot your hips. You’re aiming to get into closed guard. If you can’t secure closed guard then you’ll at least secure half guard. If you’re going to guard pull, you should practice your half guard a lot!

Pulling guard is risky, but if you have a solid submission game from your back, it’s worth trying. If you want to pull guard like Demian Maia, use it as a way to set up a submission, not to merely defend against an opponent’s strikes.

6. Back Control and Submissions

All these takedown techniques are leading to one thing for Maia. To grapple like him, you should have one target in mind – to take your opponent’s back then submit them. Maia’s back control is one of the best in UFC history and you can learn a lot from studying his perfect technique.

First of all, try to secure a body triangle from the back. This will help wear out your opponent, reduce their air intake, as well as help flatten them out. For good measure, throw some punches to keep their hands busy.

Another submission technique you can learn from Maia is to twist your opponent’s body using your legs. We saw Maia perform this beautifully against Rick Story. In the clip, you can see Maia pinning Story’s right leg to the mat and stretching and elevating Story’s left leg with his own left leg. Add to this the choke and back mount and you end up twisting his upper body one way and his lower body the other. In other words, you get one of the most brutal chokes we’ve seen in the UFC.

So there we have it. Hopefully, now you have a better idea of the techniques Maia uses that make him some a killer grappler in the Octagon. Try working on your single and double-leg takedowns, your trips, your fence work, back takes, and submissions, and soon you’ll be putting them to sleep like Demian Maia.