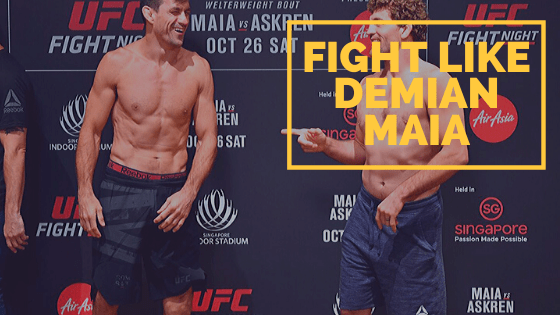 With more beautiful mounts than the Himalayas and the best hooks this side of the Beatles, watching the Brazillian in action is often a thing of beauty, with flawless technique and an natural instinct for exploiting his opponent’s body mechanics Maia is a wizard on the mat.

Even outside of the UFC his bone bending exploits have achieved legendary status with his contest against Gabriel Gonzaga (yes, that Gabriel Gonzaga, the guy who shockingly head kicked the legendary Mikro Cro Cop into next week and who competed in the UFC’s heavyweight division) being recommended viewing for all BJJ enthusiasts whilst his performance in the ADCC ( for the uninitiated the ADCC is a prestigious submission wrestling tournament held in Abu Dhabi that attracts the world’s best in the grappling arts) was a masterclass in clinical execution.

When considering Maia’s approaches to MMA it is worth considering the man’s own outlooks on the topic and the key concepts that drive his approach. It is therefore worth keeping in mind

A) Simplicity. Although capable of some seriously flashy stuff, Maia is all about the practical real life application of BJJ and therefore runs with the idea that simple, high percentage techniques rule.

B) Tying into the above is Maia’s ‘vale tudo’ approach of incorporating what is effective and cutting what isn’t. It is therefore common to see him adopting techniques from other disciplines or adapting BJJ techniques based upon these outside and often slightly more practical influences

C) You will get hit. Maia does not believe in evading all damage but rather in minimising it and using the openings provided by striking scenarios to set up and create opportunities for grappling.

Demian Maia has the highest number of takedown attempts in UFC history and whilst some detractors will gleefully point out that this includes one stretch during which he went 49-0 in takedown attempts, this stat can be misleading.

Rather than pointing to the ineffectiveness of Maia’s technique, it rather shows the high fight IQ and gameplan of his opponents and just how deadly and well regarded his takedown game was.

His long stretch of no takedowns came against a trio of elite level wrestlers (all three had been All American folkstyle wrestlers) whose camps had clearly scouted Demian’s takedown game and were prepared to do anything they could to avoid it working on them. Ancient civilisations didn’t build huge fortifications because they thought their enemies were weak, but to prepare for them being strong These opponents prepared for Maia’s takedowns because they feared them.

Maia is 29-2 in fights where he has completed at least one takedown, a record which underscores one thing. If Maia does take you down, it’s very likely to be game over for you. He’s just that good.

Two of Maia’s great strengths when it comes to takedowns are his willingness to keep it simple and his willingness to incorporate small modifications to his pure bjj game taken from Judo and wrestling. By hybridising and incorporating the most effective elements from each discipline Maia has a greater palate of techniques to choose from.

One of his most common tactics is to set up the takedown by feinting a jab and inviting the counter punch in order to set up the single leg. This very simple detail is one that can be easily overlooked is a key element of his approach to closing the distance and clearing his entry on the level change.

By inviting the opponent to counter punch with the lead hand, often by feinting a jab of his own, Maia invites his opponent to put weight onto the lead leg whilst throwing the punch. This then gives Maia an open target of space below the angle of the shoulder to level change and make his shot . As a southpaw, he is also at an advantage because he can then work to his stronger side against the opponent’s weaker (against orthodox opponents).

The techniques Maia favours to get the guy to the ground from here are where we see the wrestling and Judo elements flavouring his approach.

Remember those boring math classes at school where you would use a pair of compasses to draw circles and wonder, ‘when will this ever be relevant to my life’? Well, good news, that glorious day has finally arrived.

Again, not a flashy or overly intricate takedown but one that has proven incredibly effective for Demian. ‘Running the pipe ‘ involves Maia lifting the opponents trapped leg and then turning, tracing a crescent or scimitar shape with his own back leg whilst pressing his weight forward.

So, going back to the idea of the compass…

This has the effect of shifting the opponent’s centre of gravity, leaving them with two choices, either go down to the mat, or grow an extra leg .

The shift in weight means his free leg will no longer support him and with no spontaneous limb sprouting on the horizon, the victim does not have anything to post on and is forced to the ground.

The instructional video above is particularly interesting because it covers a number of typically idiosyncratic Maia details. Maia’s willingness to often place his head on the outside of the opponents hip when following through with the ‘run the pipe’ (just as the instructor does in the video above) takes a lot more from wrestling than classic Bjj and is something that BJJ coaches across the
land would rail against as a sure fire way to get guillotined, but Maia seems to find this more wrestling oriented approach appealing.

It is interesting to consider that again as a southpaw shooting on that lead leg, the head to the outside means that any guillotine attempt would, for an orthodox opponent have to be lead by the weaker arm, so perhaps it is this that gives Demian the confidence to risk, coupled with this tendency to spin as far around the hips as possible ever working toward the back and therefore out of range.

A great example of this sequence of going under the jab- single leg -to running the pipe was in round one against Rory Macdonald, where even though Rory sprawled against the single leg, Maia was able to finish the takedown sequence.

In the gif above you see a number of examples of Maia using the Kosoto gake.

For those unfamiliar with the japanese names, this technique is also known as the ‘outer hook’ and is essentially a trip technique, which is again simple, but mightily effective if executed with the expertise and fluidity with which Maia performs it.

Used from the clinch it involves breaking the opponents posture and using the leg to snake around the outside for the trip. Maia has used this technique effectively against the cage, but it is his use in the centre of the cage that is most impressive. A particularly juicy example being in his match with Jorge Santiago where it looks as if from a punching exchange, Maia simply runs right through Jorge, taking him down with him.

The key mechanic in this technique is the counter balance between the top and bottom of the opponent’s body. The motion for the person executing the technique is push/ pull. Push with the top half of the body to send the opponent backward and break their posture. Pull with the reaping leg to send the legs in the opposite direction.
Think of it like pushing on an upright pencil. Imagine in your minds eye where the middle of that pencil would be.

If that pencil is a living breathing MMA fighter then that top portion is definitely going to be coming forward and also trying to knock your head off.

The reaping leg will do the pulling toward you, what you need to ensure is that you do the pushing above the midline to push the top half backward.

If you watch the example against Santiago mentioned above. you’ll see that as Maia moves to the leg hook he also level changes moving his underhooks down to the waist in order to drive his weight forward at the top part of the lever. Pushing the top part of Jorges body back as the hooking leg brings his legs forward. This technique often lands you on top of the opponent and if they are savvy in some form of butterfly or half guard. Which leads us to…

Here is Ronda Rousey explaining how to do a Kosoto Gake

Like a knife through butter, Maia’s guard passing is a gorgeous thing to watch.

His most beautiful technique to my mind is the use of the leg weave to ‘dope mount’.

A technique which looks much more complex than it is (resembling in some shots a tangle of knotted spaghetti), the basic idea here is to force the opponents guard downward by interlacing the legs. (This requires some degree of spatial awareness). Circling around the opponent, preferably with the head under hooked for leverage, Maia will allow the near leg to capture and grapevine over the opponents top leg. By then forcing his leg upward, between his opponents leg he can use it as a barrier between them, restricting movement by posting with the other leg and using the opponents own bottom leg for an anchor.

To make this clearer, imagine standing, having a waistlock on your opponent from the side and with the leg closest to their rear end trying to knee them in the gonads. Your leg would end up interlaced between theirs. Apply this when horizontal and you weight is now forcing down their guard.

Maia will then pull his posted leg in with the knee close to the hip and then rib cage and transition to dope mount.

A gorgeous example of this is in Maia’s contest against Laflare.

You imagine that this line from a famous beat em up is constantly playing in Maia’s head as he maneuvers toward submissions. What is interesting is that even in his takedowns and guard passes you see Maia’s willingness to turn around his opponents hips, always and I mean always, looking to take the back.

Again this comes down to his belief in using high percentage techniques.

The vast majority of Maia’s submissions have come from rear naked chokes. Why?

Simply, because this technique, when applied properly, is a very high percentage technique.

Other favoured techniques like triangles and neck cranks work on the same principle of using chokes or attacks against the neck and throat area as a vulnerable attack point where once the technique is in, it is in.
This exemplifies Maia’s love for Rickson Gracie’s mantra that it was not the flashy techniques but brilliance in the basics that works in the real world, so for finishes from Maia, no flashy new technique just drill and drill and drill those rear nakeds.

And there you have it. Majestic maneuvers from the master of the mat. Real world, real approaches, real simple.