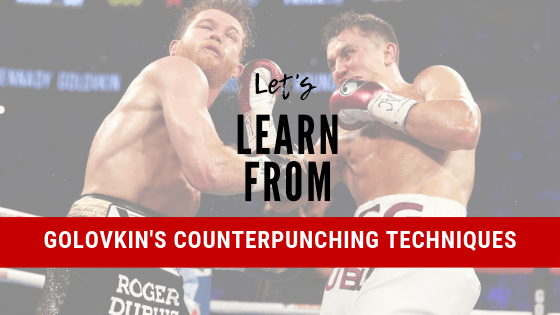 Gennady Golovkin is a specimen to watch in present-day boxing. One of the most feared fighters in the middleweight division, the Kazakh boxer is not just about power but also smart, aggressive, counter-punching style of boxing.

Golovkin is a master at countering jabs. He does so with a lot of precision and while he’s active. One thing which is already clear is that good jab skill is essential in order to beat an aggressive pressure fighter. But what if the aggressive pressure fighter also turns out to be a counter puncher? And what if he’s incredibly brilliant at countering that move one which you thought would keep your opponent at bay?

In the clip below, you can see Golovkin parrying his opponent’s jab with his right glove, usually sending it over to his left shoulder. Simultaneously, Golovkin is shooting his own jab which catches his opponent. A point to note here is that Golovkin is actively countering the jab whilst defending himself.

In this clip above you can see Golovkin parrying his opponent’s jab whilst stepping forward with his own. As explained before, his opponents step forward when they jab and this spells doom on them as they end up walking right into Golovkin’s jab.

After watching dozens of Golovkin’s fights, one thing is pretty clear. He doesn’t like countering over the jab anywhere near as much as he likes countering under the jab or parallel to the jab. The reason why he loves the latter is that it’s unpredictable in nature. The opponent cannot see or adjust to parallel counters. Taking advantage of this, Golovkin will either shoot a jab parallel to yours or counter your jab using an UPPERCUT.

In the clip below, using a subtle slip to the outside, Golovkin moves just enough to the right to avoid Gabe Rosado’s jab. Still, however, you can see Golovkin’s right hand partially deflecting Rasado’s jab. Consequently, Golovkin counters with a straight right hand. Thus, you’ve already seen Golovkin counter his opponent’s jab with a parallel jab, an uppercut, and a straight right. Simply outstanding countering techniques from Golovkin. Brilliant boxing.

Why do boxers fear Gennady Golovkin?

When you’re up against an aggressive pressure fighter, you need a jab. However, if your jab is being countered, you become reluctant to shoot the jab. However, you’re still against the same fighter and if you shoot the jab, you’ve to take considerable damage, which again, stops you from shooting the jab. But you do need a jab to win the fight. THIS IS A NIGHTMARE THAT OPPONENT’S GO THROUGH WHEN UP AGAINST GENNADY GOLOVKIN. Watch the clip before to understand this better:

Now, let’s take a look, how Golovkin was able to set-up an uppercut. If you watch the clip below, he steps in close to Rubio and smothers him. He then uses his left arm to pin his opponent’s glove to his chest thereby preventing Rubio from working on the inside or on Golovkin’s right side of the body which is momentarily exposed before he sets up. Within seconds, he pushes Rubio off and shoots a tap left hook. You can see that it’s a sweet punch and he doesn’t intend to do much damage with this punch. However, he does intend to create an opening with it. That’s where Golovkin gets it right.

Executing the variation to perfection

Golovkin’s has a subliminal understanding of his opponent’s body and movement. A fine specimen of that is, when boxers are generally exchanging blows in the mid-range, they tend to counter a left hook with a left hook of themselves. Exchanging hooks is quite common in this range. However, Golovkin begs to differ. While he has thrown the left hook once, he quickly drops his right hand and does so with the intention of landing the right uppercut down the middle. Thus, he set the trap, baited his opponent and then smashed the temple with a crisp uppercut. What you see in the highlights i.e. the clip below is the punches after the uppercut but it was the uppercut that actually stunned Rubio.

In the clip below, you’d see Golovkin slips two jabs and roll the right hand. There’s no doubting Golovkin’s power but his subtle movements are highly underrated. From slipping and rolling to other evasive movements, he glides past the opponents without them noticing it. Add to the fact his excellent defense, and you’re looking at arguably one of the best defensive system integrated into an aggressive counter-punching pressure fighter’s system.

Aggressiveness is not a fighting style, counterpunching is!

If the man was occasionally countering his opponent’s jabs, we could’ve made a case that it was just a coincidence. However, Gennady Golovkin consistently takes away the jab from his opponent. Thus, his counterpunching is not a coincidence but rather instinctive. That is what allows him to turn defense into offense.

In the clip below you can see Golovkin using his right glove to block and deflect his opponent’s jab over his head. Shortly, he follows it up with a counter i.e. a short-left hook over the Rosado’s right hand.

This was a short guide as compared to the average analysis post that we do. However, it’s just one aspect of Golovkin’s style i.e. counterpunching that we got so much substance from. This goes to show the talent of his boxer and how he’s edging towards becoming a future legend. With 35 knockouts in 31 wins at 37 years of age, he might be at the tail-end of his career but the lessons we can draw from him are priceless.