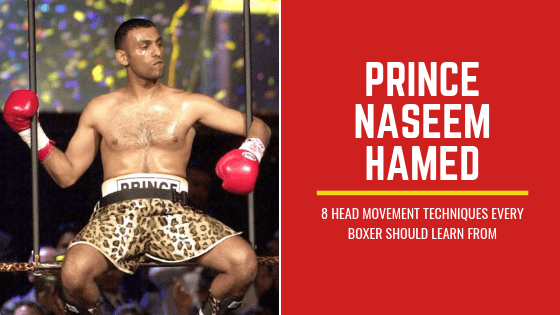 Though head movement is not talked about much in the initial stages of your boxing career, the later stages are filled with conventional wisdom.

When you’re starting out, you’re taught how to attack, defend or counter your opponent’s punches.

However, the use of effective head movement isn’t really a part of that curriculum as it’s an advanced technique which might confuse the beginners right at the start of their journey.

When head movements brought a breath of fresh air

When it comes to head movements, there are hardly any names which can surpass the British Legend Prince Naseem Hamed. He has taken head movements in boxing to an entirely new level. While the majority of the fighters are vying to take their opponent’s head off with a devastating blow, Prince Naseem begged to differ.

Protecting your head is one of the basic moves taught in boxing. However, Naseem with his eye-catching style posed serious questions to conventional wisdom.

The most fascinating fact about him using the head movements was that he succeeded far more often than one could assume.

His extreme footwork, bizarre head movement, and crazy theatrics before during and after his fights are simply legendary.

Prince was an absolute master when it came to drawing his opponents and countering. He served his head to his opponent’s on purpose who used to fall for his bait. Though it was a dangerous strategy, Naseem was an undisputed master at pulling off this technique to perfection. Using his head movements, he was always able to manipulate distance. He was great at tricking his opponent with bait and adjusting his movement as soon as they were about to punch.

In general sense, we’ve seen a lot of boxers use distance manipulation to a great effect. However, not many can use head movements to achieve their goals. Prince took his tactics to such an extreme that the footage of his fights creates clear, obvious and interesting examples from which we can study.

Prince often used his head movement to shuffle outside to land his rear hand. In current times, you can see the likes of Lomachenko using a similar technique to great effect.

Naseem was an extremely good counterpuncher and this helped him possess a low-risk long-range weapon from which he could easily pick at his opponents. Without the speed and overall dynamics, a counterpuncher can easily be exposed. Prince used the flicker jab to a great effect in order to keep his opponent’s at bay. He used to combine that with his exquisite head movements to exit or enter an angle.

Using this technique, Naseem was able to achieve two things:

Thus, what we can learn is that through his active counterpunching, he was able to maintain distance and get into his opponent’s head. They would lose their composure and would go wild on Prince whilst he’d easily counter them as he’s able to see it coming from a distance. Thus, as a counterpuncher, you should maintain the distance and bait your opponents, forcing them to commit mistakes.

Using Head Movement to Plan Ahead

Prince Hamed always thought about his upcoming move before his opponent had even landed his shot. How? Because he was the one instigating his opponent’s offense. To make it simple, he baited his opponent, revealing a single target, that is his head, and placing it at an angle where his opponent attacked without thinking twice. Basically, they fell for the bait. As soon as they punched, Hamed’s head was already in a different direction and they were greeted by his punch.

So, we can learn three things from this move.

Simply phenomenal draw. Apart from this technique, Hamed used to deploy similar techniques with the intention of countering. Herein, his opponents would fall for his bait but Hamed would have the correct counter already in mind. Hamed’s most basic draw was to lean forward to his lead side whilst keeping his hands low to present his head as an enticing target.

The moment Naseem saw one of his competitor’s hands move, he either pulled or slipped to dodge the bullet and capitalized on the new openings in his opponent’s defense.

Use Head Movements to setup attacks

Let us understand this with the help of a clip. In the video below, you can see Hamed shifting back simultaneously to help create distance and put power into his punch. Another technique Hamed would use was to crouch down low to set up a cross or overhand.

In the clip below, he does the same thing with a major difference. Here, instead of staying at one position and setting up a cross or an overhand, he launches himself forward transferring his body weight into his punch. You can see a beautiful connection over his opponent’s lead hand.

One of Hamed’s most bizarre counter was when he used to lean back and sink in a powerful uppercut. He used to land uppercut from distance as well as from tight ranges. Regardless of the range, his uppercuts were always well-structured. We’ve seen in our case studies before how you can pass through your opponent’s guard with a sizzling uppercut.

A great head movement increases your agility in many ways and transferring the bodyweight is one of the many benefits. Hamed’s seamless head movement allowed him to shift his bodyweight. He often leaned forward to his lead side to draw his opponent’s punch.

This movement enabled him to load a powerful gazelle punch from just underneath his opponent’s lead hands. A fascinating aspect about this move was that Hamed generated great power by shifting his weight and thus his punch would land well irrespective of his opponent’s taking the bait or not.

Be it uppercut, hooks, jabs or any punch rising upwards, this technique using the transfer of weight worked wonders for Naseem every single time.

Head Movement as an alternative to blocking or parrying

One of the major benefits of using a head movement over blocking or parrying is that it puts you into a more advantageous position. Thus, you are able to put yourself into a better position capable of exploiting the openings as soon as they appear.

Naseem preferred head movement over blocking or parrying not only because it helped him stay safe but also setup alternate angles from which he could connect. This allowed him to create a non-existing path through and around his opponent’s guard which wouldn’t be there if he employed a block or a parry.

In this clip below, Naseem leans in and draws in a jab but his opponent immediately follows it up with a cross. Naseem ducks that by crouching low and simultaneously digs deep creating a perfect distance to land a body shot which sets him up for a knockout blow straight to the head.

Though there’s always a fear factor involved in this technique, Hamed used to pull it off perfectly. He used to take advantage of his head movements to land powerful shots. By crouching low or changing angles, Hamed often placed himself in a position where his opponent would most likely run into his punch.

We’ve already learned in our extensive taekwondo tutorials as well as in our beginner boxing tutorials on how you can use bodyweight and movement to generate power.

Prince went a step ahead of the Drunken master as he enhanced his ability to create new angles seamlessly by switching stances. By doing so, Prince created access to a full range of head motions in every direction. He was able to do so through stance switching mid-combinations. This allowed him not only to create new angles but also to draw counters from the same. The head movement allowed him to easily enter the range.

Combined with his unusual motions, Hamed was able to land timely punches with perfection which is why he was so deadly. Even the head slots which appeared seemingly not suitable in a particular circumstance, Hamed used to create an opening due to his pure athleticism and courage.

The secret to great head movement in boxing

The general idea of any head movement is to basically shift the target. Instead of defending all the time, when you move it along the axis, you have your hands to attack. But that’s basic as to what we’ve already seen above. By reading this blog, you’ve trained your eye to spot a great head movement and appreciate it when you see it the next time.