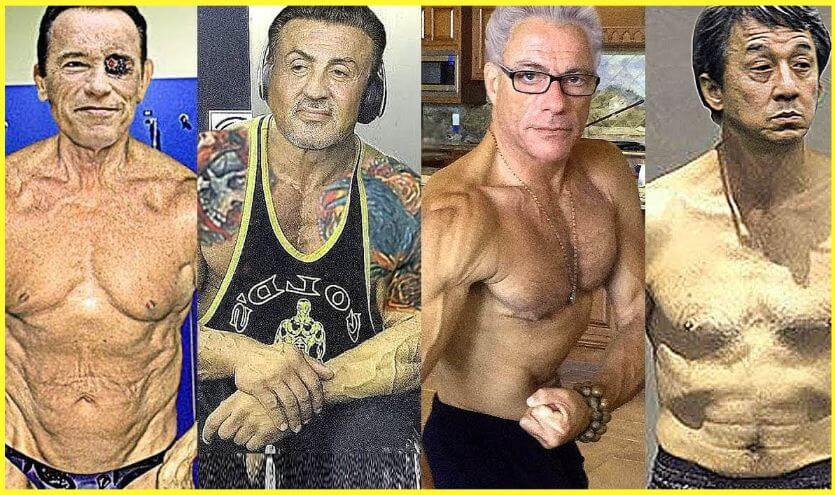 Arnold did it all, he is the real incarnation of the American dream.

Arnold came to the US at the age of 21, he spoke little English, but he quickly climbed up the ladder of success.

In a few years, Arnold became the prominent face of Bodybuilding, he later won Mr. Olympia 7 times and became the greatest ambassador of bodybuilding.

Steven Seagal is an 8th-dan black belt in Aikido.

He is the first foreigner who opened an Aikido dojo in Japan.

When former UFC middleweight champion Anderson Silva knocked out his challenger Vitor Belfort, Steven Seagal was credited for showing that kick to Silva.

Seagal also helped Lyoto Machida in his training. Machida used the same kick, crane kick, against the legendary Randy Couture, which resulted in a total knockout.

Steven Seagal is a close friend of Vladimir Putin. In 2016, Seagal was granted Russian citizenship.

At the age of 75, Stallone seems to be gaining more muscles throughout the years.

Stallone’s Instagram page is full of pictures and videos of him training and showing off his physique.

The Swedish chemist made his breakthrough portraying the character of Ivan Drago in Rocky 4.

After Rocky, Dolph Lundgren starred in more than 42 movies and became one of the prominent action stars in the 80s and 90s.

During four decades of acting, Jackie Chan starred in more than 140 films.

Jackie Chan has a black belt in several martial arts:

The Belgian actor started martial arts at the age of 6, he began with Shotokan karate then switched to kickboxing and Muay Thai.

At the age of 18, he won the national bodybuilding competition, Mr. Belgium.

Carl Weathers, better known for portraying the character of Apollo Creed in the Rocky saga.

Kurt Russell started his career as a child actor, he first portrayed several characters for Disney then dominated the action movie scene during the 70s.

The Guardian named Kurt Russell as one of the greatest actors who have never been nominated for an Academy Award.

1. Jet Li explained in one of his interviews that he suffers from hyperthyroidism.

hyperthyroidism is a disease that causes the thyroid gland to produce too much of the hormone thyroxine which causes the metabolism of the body to go fast and high which leads to excessive weight loss.

3. Contrary to the popular belief, Jet Li admitted in one of his interviews that he has never been in a real fight.

He is surely a master in martial arts, but he was always a quiet kid and he always avoided trouble.

1. Chuck Norris has built a wealth of $70 million over several years in Hollywood.

3. Chuck Norris’s real beginning of martial arts learning was in South Korea when he was there with the U.S. Air Force.

Norris met a Korean master named Do Sik Mun who introduced him to the art of kicking.

1. Bruce was born in Germany to a German mother and an American father.

2. He had a stuttering problem when he was a child. He later discovered in junior high school that his stutter goes away when he performs on stage, so he decided to pursue a career in acting.

3. In his biggest breakthrough movie Die Hard, Bruce suffered permanent hearing loss during a scene where the explosion had to be real and extremely loud.

Bruce lost 60% of his hearing in his left ear.

1. He is best known for portraying the character of Blade in the Blade saga.

2. Wesley Snipes didn’t pay taxes in 3 years from 1998 to 2001. He later got convicted of three misdemeanor counts and was sentenced to spend 3 years in jail.

4. Many of Wesley’s costars talked about him getting high all the time in the film set for the Blade saga.

5. Wesley Snipes received a star in the Hollywood walk of fame.

1. Danny Trejo spent more than 11 years in and out of jail. He was a convicted criminal and drug addict.

2. He won the welterweight championship belt in boxing while he was jailed in San Quentin.

3. After a long time in and out of jail, Danny Trejo had enough and decided to change his life. He completed the 12-step rehabilitation program.

4. His acting career started accidentally when he landed a role in a movie called Runaway Train.

One of the film crew spent time in jail with Danny Trejo and recognized him in the set, he then talked to the production to offer Trejo a bigger role in the movie.

1. Keanu Reeves almost changed his name to Chuck Spadina because his agents told him that his original name does not fit for Hollywood.

2. Keanu Reeves is a motorcycle fanatic.

He also has a missing spleen because of a motorcycle accident.

3. Keanu Reeves does not believe that William Shakespear wrote his own work.

This is a well known theory amongst historians of English literature.

1. Did you know that Disney modeled Aladdin by taking some facial features from Tom Cruise?

2. Tom Cruise has three ex wives and he divorced them all when they reached 33 years old.

In 1981, the Ray-Ban company suffered low sales which was going to put the company out of business. After Tom Cruise wore the Ray-Ban shades in several movies, sales went up and he saved the company.

4. He refuses to be an action figure.

Tom Cruise has expressed on many occasions that he will never accept being featured in any video game.

5. Tom Cruise follows the David Bekham diet where he consumes several snacks during the day.

The snacks have to be low calorie and should be organic.

Mel Gibson bursted into the movie scene in the 80s where he portrayed iconic roles in big movies such as Lethal Weapon and the Mad Max saga.

1. Nicolas Cage is going to be buried in a pyramid.

Yes it sounds strange, but Case has his reasons, he wants his body to be protected from groupies and crazy fans in graveyards.

2. Did you know that Cage eats animals based on how they mate?

Nicolas  Cage only eats animals that are dignified while they mate like birds and fish.

3. Nicolas Cage once bought a haunted mansion for one purpose only, getting inspired to write a horror novel.

4. He once got high on mushrooms with his cat.