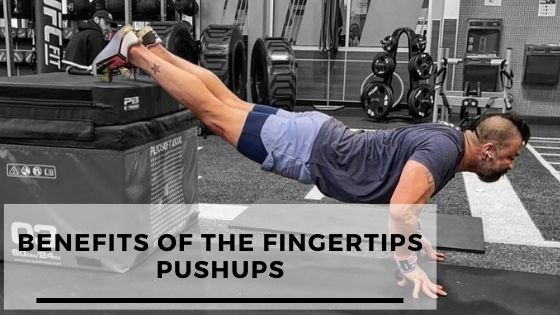 The fingertips push up is one of the hardest variations of the push-up you can ever attempt, and one of the most difficult exercises there is.

It requires one to lift his body from the ground in a traditional push-up manner, but with just his/her fingers.

Due to its level of difficulty, it requires a lot of effort and physical training, but the benefits of the exercise are worth the pain.

So let’s get right into it.

How to execute a fingertip push up properly, and what are some of the benefits of it.

Steps to Performing a finger push up

Before you ever think of getting into doing finger push-ups, you want to make sure that your ability to perform regular push-ups is extremely good.

If not, you will more than likely break or sprain your fingers and tendons.

Put something underneath your fingers

Once you’re comfortable with doing push-ups without much issue, then you can begin to try the fingertips push-ups.

But before you do it fully, you can start by putting something like a cloth or anything directly underneath your fingers.

This isn’t the final form, but it would give your fingers some level or preparation while still having something under it to support.

Once you’re able to perform the previous step comfortably, then you can begin the fingertips push-ups.

If at first, it appears too difficult, you should go back to the previous step to build more familiarity with the exercise, then slowly build up to perform full Finger Push-ups.

Now that we know how to do the exercise, let us take a look at some of the potential benefits;

This one is pretty obvious; the fingertips push up is done by using your fingers to lift your body, as such, all muscles and bones connected with your hands will get stronger. This will inadvertently increase your ability to grip and hold on to things better.

The forearm is the main muscle that is associated with performing finger push-ups, even more so than the finger itself.

Consequently, performing the exercise will lead to an increase in strength in the forearms, as well as an increase it’s size.

Like the normal conventional push-up technique, finger push-ups also work the chest and the muscles around it, thereby causing it to increase.

Although it’s not as effective as conventional push-ups in this particular area, it can certainly get the job done.

To conclude, we would like to let you know that finger push-ups are extremely risky and difficult.

One wrong move and you could completely break and fracture your wrists, your fingers, and even your tendons.

Due to this level of risk, only a handful of people do it regularly, but if the potential benefits seriously appeal to you, then you want to build towards the push-ups slowly by making sure your body is in the best possible condition.