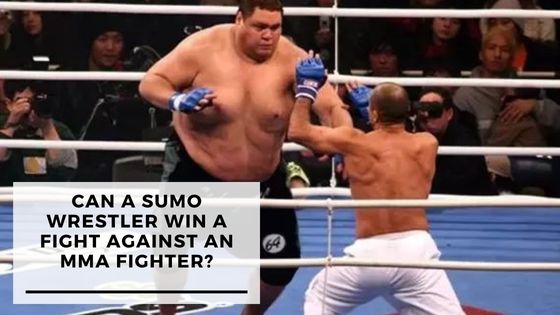 MMA was originally created for people to know which fighting style was the best.

And in the inaugural UFC, there were a variety of fighting styles displayed. It included one sumo wrestler by the name of Taylor Wily (Teila Tuli).

Taylor Wily was a Makushita 2 sumo wrestler, which meant that he had achieved a lot. His first UFC bout was remarkable.

Just 26 seconds in the octagon was enough time to leave him concussed and for one of his teeth to part company with his gum.

Watch the whole fight below

While you can acknowledge the skill and athletic focus that it takes to excel in sumo wrestling, the fact is that their built automatically places them at a disadvantage against more athletic and muscularly “free” counterparts.

In MMA, you need to know how to kick, grapple, and strike. And aside from grappling, kicking and striking are not among a Sumo wrestler’s strongest traits.

They have a very focused skill set. They are physically at a disadvantage as they have bad knees that for most can’t go higher than their waist, shoulders that are not flexible, and they are not the quickest on their feet.

So a Sumo wrestler’s chances of competing in MMA are slim.

It is generally not very effective in MMA as a form.

Akebono Tarō back in his sumo days

However, that is not to say that there are no overweight fighters in MMA.

For example, there is Roy Nelson, who has won a few fights and also excels in submissions.

He has been successful both in the UFC and the IFL and fights now in the Bellator Heavyweight Grand Prix.

Compared to other fighting forms like kickboxing, Muay Thai, and even boxing, a sumo wrestler is short on skill.

In all of these forms, movement, precision, striking, and aggression are all paramount.

This means that fighters are often unpredictable, and anyone fighting them has to be careful of the unpredictability.

But, in sumo, it is more artistic and requires that fighters conform to very stringent rules.

They do not even get hit in the face, and that is a hard reality that a Sumo wrestler will be hit with.

If you have watched, for example, a Brock Lesnar fight in the UFC, you will see that the man has everything it takes to be a good fighter, but anytime he gets hit, he tends to panic, and once he begins to panic, he loses the game.

So with Sumo wrestlers, it is the same. It’s difficult to prepare for something you’re not used to, and one punch from a proper boxer or kickboxer can knock a Sumo wrestler from MMA back to Sumo.