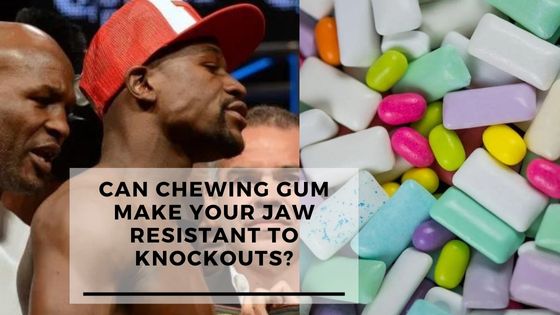 One of, if not the most important facet of any combat sport’s athlete skill set is their ability to absorb punches without getting slept or being too compromised.

We’ve seen fighters like Tony Ferguson and Canelo Alvarez rally their way to victory because of their outstanding punch resistance.

Due to its importance, there is always going to be a lot of controversy and inquiry into what can improve a fighter’s chin.

This is why we’ll be looking at one of the rumored ways of improving a fighter’s chin; Chewing Gum.

As weird as it may sound, there are some sets of people, professionals and fans alike that solidly believe that chewing gum consistently is a great exercise for the jaw and it could strengthen it.

In fact, back in the day, a famous boxer; Jack Dempsey was known for always chewing something flexible and tough like leather, and he had a rock-solid chin; but recent observations studies have attributed a fighter’s solid chin to a lot of factors, other than his jaw muscle.

Things like the fighter’s neck, conditioning, posture and overall genetics have been cited as what makes a fighter able to withstand heavy shots without getting knocked out, this renders chewing gum to improve punch resistance largely ineffective.

But does this mean that chewing gum doesn’t have advantages for the boxers who do?

Well, the answer is no. Below are some of the advantages that fighters could get from chewing gum;

Combat sports is a gruesome and brutal occupation, and it requires a lot of physical and mental effort. Sometimes, this mental effort could become too overwhelming for the fighters, and chewing gum could act as a distraction while reducing anxiety and stress levels.

A research by the Journal Brain and Cognition in 2013 showed that chewing gum could increase reaction speed up to 10 percent more than if they weren’t chewing. This is because it increases the flow of blood to the brain, thereby making it more alert.

This is particularly important for combat sports athletes as they require epic reaction times in fights.

So this is where we leave it for today; regardless of rumors, gum chewing has a fairly low impact on the ability of a fighter to take a punch, but regardless of this, it could still be important in improving other areas of the fighter’s overall performance.