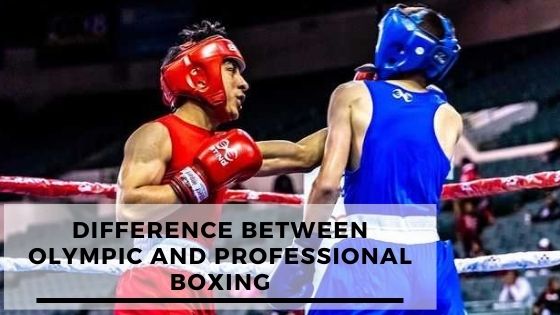 Many great professional boxers, past and present all made their names from boxing at the Olympic games.

The likes of Mohammed Ali, Floyd Mayweather, Deontay Wilder and Anthony Joshua all won medals in boxing at the Olympics.

So can you say Olympic boxing translates to professional boxing?

Well, the answer is no.

Because there have also been a lot of Olympic medalists that have failed to replicate that kind of form professionally.

So what are the major differences between Olympic and Professional Boxing?

Let’s get right into it.

The motive for professional boxers to fight is quite different from that of Olympic boxers.

While professional boxers box to get paid and to earn money, for Olympic boxers, it is more about the recognition and the experience.

There isn’t any boxing governing body that pays Olympic-level boxers, their only form of earnings might be from sponsorships or the government.

This is pale in comparison to professional boxing which is more often than not scheduled for 12 or 10, 3-minute rounds, with a minute break in between rounds.

Although, there can be exceptions, depending on the organisation, or the fighters.

Perhaps the most striking difference between Olympic and professional boxing.

Because safety is the priority in Olympic Games, headgear is a compulsory rule for all female boxers.

In fact, up until the last 5 years, male fighters were also instructed to wear headgear.

Olympic-level boxers are also instructed to wear a singlet when they fight.

This is in stark contrast to professional boxing, where headgears are highly prohibited across both genders, and the wearing of a singlet is only permitted for female fighters.

Due to Olympic boxing primarily focusing on the boxer’s health, judging is based on the ability of the fighter to land clean strikes and a high level of technique.

While professional boxing priorities effective aggression, defense and knockdowns in a fight.

Given that the main centre of focus for Olympic boxing is fighter safety, the level of injuries is very low.

Also, the fights are short which means that there will be less time to get hit with clean shots.

Compare this with professional boxing, and there is a stark contrast.

Professional boxing comes with a lot of risks pertaining to life-threatening injuries and scenarios.

There are still other minor differences, like ring size, number of weight classes, and the eight-count rule, but the above are the most comprehensive.

On the face of it, it might look like there isn’t much difference between Olympic and professional boxing, after all, it’s just two people trying to box each other right?

But look in-depth into both “sports” and the difference is huge, this is why not everyone that does well in the Olympics can automatically just translate that into the professional league.