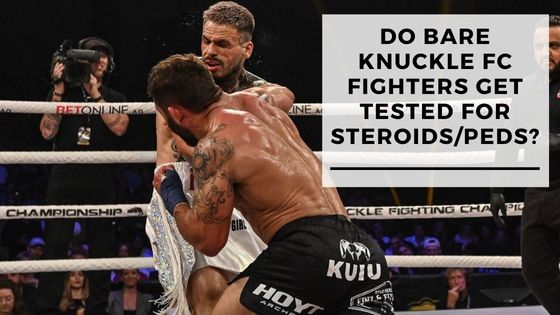 The answer to that question is yes and no.

While major promotions such as the UFC & Bellator have taken testing to the next level with their rigid and sometimes tedious testing of fighters, the same can’t be said about Bare Knuckle FC or even boxing itself. The truth lies somewhere in the middle.

In February of this year, Chad ‘Money’ Mendes made his Bare Knuckle FC debut in spectacular fashion. The former two-time UFC featherweight contender made quick of his opponent, Joshuah ‘Famez’ Alvarez, knocking him out by way of TKO in the fourth round.

Now, while that sounds amazing and all, Mendes’ physique a day before during the weigh-ins raised a few eyebrows.

He looked massive. As one Reddit user mentioned, he was built like a propane tank, which would be the correct metaphor in this case.

The stocky American definitely looked like he was joining a weight-lifting completion, looking very, very different than his UFC glory days.

So what is going on?

It’s simply down to the testing procedures than anything else.

In the case of Mendes, there is no report or indication that he was tested. If he was tested, it was never disclosed.

One can only speculate based on what has been seen. He looked simply bigger and stronger. That does not mean that other fighters are taking PED’S/steroids though.

However, back in 2019, when Conor McGregor’s team-mate and friend Artem Lobov made his debut against former boxing champion Paulie Malignaggi, BKFC president David Feldman said that both fighters were tested up to FOUR times each before the fight took place and one time after the fight.

At the end of the day, it is difficult to know who is getting favored here (if there is any favoritism) but there are certainly indications that some might be benefitting from less frequent testing.

In essence, Bare Knuckle FC do test their fighters, but not at the same capacity or frequency as other promotions do.