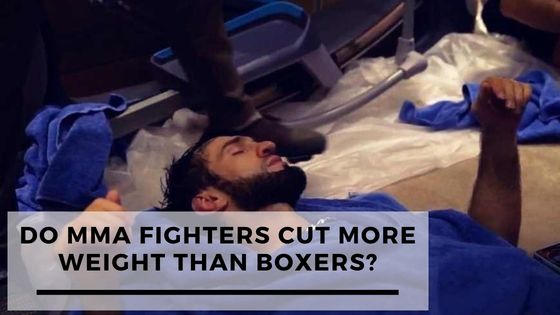 Mixed martial arts (MMA) and boxing can be said to be two peas of the same pod albeit different in some ways, just like the peas in a pod are different in size.

One notable difference is in the use of hands and legs by MMA fighters, whereas boxers are forbidden from using their legs in a boxing fight.

Classification of fighters in both boxing and MMA is done based on the weight of the fighters.

This classification helps prevent undue advantage to boxers, just imagine a heavyweight fighter up against a featherweight fighter – bloody.

What does it mean to cut weight?

A fighter must weigh less than the maximum designated weight for the particular weight division he is competing in.

For example, if a boxer weighs in at 52kg and is up against a boxer in the flyweight category.

He then needs to cut his weight to below 50.80kg which is the maximum designated weight for that division.

HOW DO FIGHTERS CUT WEIGHT?

Techniques of cutting weight vary from fighter to fighter and MMA to boxing, but some similar processes are followed in the weight cut journey of fighters.

Fighters typically start their weight cut in the weeks leading up to a match.

Chronic weight cuts involve eating less food while training more, this goes on for weeks before the weigh-in which occurs 24hours before the fight.

After the weigh-in, fighters eat heavy but easily digestible carbs and take a lot of water in a bid to gain back the lost weight before the fight.

Extreme dehydration is the main ingredient of rapid weight cuts; this is also followed by a no-carb diet.

Fighters deprive their bodies of water for 4-5 days before the weigh-in while losing body fluids through sweating a lot by employing saunas, hot baths or plastic jumpsuits.

Fighters who use this method can lose about 20kg of weight before the weigh-in.

Rapid hydration is then employed after the weigh-in to enable the fighter to gain as much weight possible as he lost.

WHY DO FIGHTERS CUT WEIGHT?

Weight cut is done days to weeks before a match to enable a fighter to weigh lower than the maximum weight for the division he is to compete in.

In reality, the hidden reason fighters engage in weight cuts is to have an undue advantage in terms of weight.

After weigh-in, fighters try to rapidly gain much of the weight lost before weigh-in to weigh heavier than their opponent. Simply put, this means a fighter weighs 90kg but fights in a weight division with a maximum weight of 80kg – this gives him an undue advantage over his opponent.

ARE THERE RISKS INVOLVED IN WEIGHT CUTS?

Yes. There are several health risks weight cuts pose to the health of a fighter, some of these risks can lead to death. Rapid weight loss which involves extreme dehydration can lead to heat stroke, organ failure and death.

Yang Jian Bing, a flyweight fighter died in 2015 as a result of extreme dehydration before his fight against Geje Eustaquio.

MMA fighters are known to cut far more weight than boxers. Boxers cut less weight than MMA fighters because of the little difference in weight between weight divisions in boxing – which are usually not more than 10kg.

MMA fighters lose as much as 30kg of weight before fights – extreme! The biggest weight cut to be recorded is that of MMA fighter, Anthony Johnson.

He cut about 40-50kg for his matches during his career in the UFC.