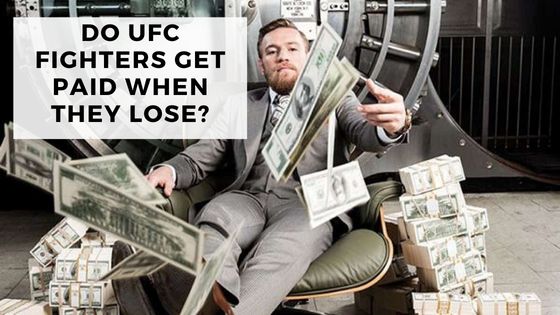 Most fighters under UFC contracts are offered show money and win money, this is how the UFC pays its fighters. This is also the UFC’s way to motivate fighters to win fights.

For example, a fighter who is making their debut in the UFC will be making 14k to show up for the fight and 14k if they win. So basically, if they lose they only get 14k, which is nothing compared to the time and money they have spent preparing for the fight.

Many MMA personalities including Joe Rogan have criticized the UFC’s way of paying fighters.

Joe Rogan himself said that a fighter doesn’t need to get paid half what he or she deserves to be motivated.

The reason behind what Joe Rogan said is simple, MMA is not tennis or basketball! Losing an MMA fight includes severe consequences which may be getting beat up, choked up or even knocked out!

The win money might motivate the fighter a little bit, but the consequences of losing are the biggest motivator.

Not all fighters are treated equally

Now let’s talk about the fighters who are at the top of the food chain, the McGregors and the Adesanyas. These types of fighters are treated differently and don’t adhere to the rule of show money-win money.

The more popular the fighter is, the more privileges they have when negotiating with the UFC. Champions get Pay Per View points, which means a percentage of the PPV money.

Non-champions who are big draws like Conor McGregor and Masvidal also get PPV points. It is a negotiation game and the UFC doesn’t treat everybody equally, the fighters who can draw eyeballs and can move the needle are treated differently.