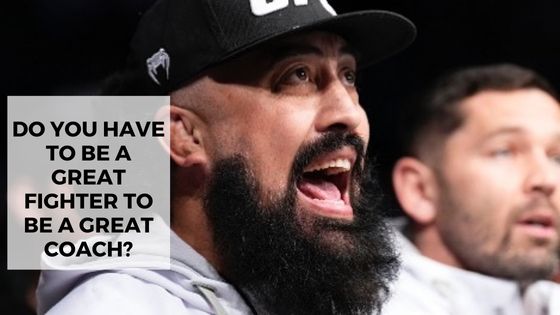 Coaching and fighting are two separate things. Being a coach requires different skills than fighting.

This is valid for all fighting disciplines, MMA, Kickboxing, boxing, etc.

1. Being a teacher is different from being a student

A coach has to be able to theorize and break down techniques, which is not a skill that fighting requires.

A fighter has to be a good imitator, with a good eye and good body coordination, they have to watch a technique and replicate it.

A great coach should have deep knowledge of human psychology because forming champions is not only a matter of technique but also a matter of mindset.

A coach should understand how each of his students thinks, and then figure out a psychological approach to help them acquire a winning mindset.

We all have in our gyms that fighter who beats everybody in the gym but loses once they are under the spotlights on competition day. Why do you think this happens?

It is simply a matter of mindset, the fighter gets into a state that cripples them psychologically and prevents them from performing well.

This is where a great coach has to intervene and help the fighter modify their mindset.

In order to do that successfully, the coach has to have good knowledge of human psychology and how to implement the right mindset.

3. A great coach is a great strategist

A great coach is also a strategist, he or she has to be like a chess player who invents strategies for his fighters according to their opponents.

Therefore, a coach has to be well-versed in different martial arts and has to be curious about other sports and disciplines to draw inspiration from them.

Javier Mendez, Greg Jackson, Trevor Wittman, etc. all these great MMA coaches who have/had at least one champion in the UFC have never set fought in a cage as fighters.

Other great MMA coaches have in deed fought in MMA, but they never succeeded as fighters.

One of the greatest examples is Eugene Bareman. He has an MMA record of 4 wins and 3 losses, which indicates that he was a low level fighter.

On the other hand, he built City Kickboxing gym and now he has two dominant UFC champions:

Eugene Bareman is a good example of how a bad fighter can be a legendary coach.

Eugene Bareman in one of his MMA fights