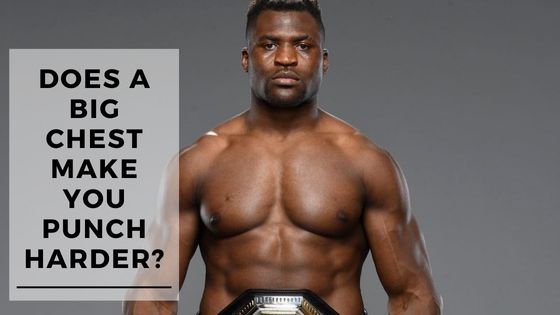 The myths and the facts surrounding a fighter, or an individual’s ability to punch really hard will always be a source of argument and controversy.

From the legs to the back, to the arms, to even the chest, there always seems to be some level of disagreement over where the ability of a fighter to punch hard comes from.

Well, we’re going to join in this controversy, and talk about the relationship between chest size, and punching power.

When you look at the physiques of athletes like Francis Ngannou, Mike Tyson, or Yoel Romero, and you look at their highlight reel of spectacular one-punch knockouts, it certainly supports and strengthens the claim that having a larger chest could be directly proportionate to having a higher punch power, but this isn’t entirely true.

Yes, the chest muscles generate the most power from your upper body muscles, but this power is largely insignificant in the grand scheme of things, especially when you consider the disadvantages of having an extremely large chest.

Although, there are exceptions to every rule, like the fighters listed above, having chest muscles that are too big could negatively impact a fighter in the following ways:

Make no mistake about it, for anyone engaged in combat sports, having massive chest muscles could greatly impede your ability to explode and cover the distance in a fight properly.

Take a look at athletes like Anthony Joshua, and Paulo Costa.

All three of them are built well with huge chest muscles, but that isn’t the only similarity between them, as their previous fights have shown that these fighters tend to fatigue a lot easier than their opponents.

This is due to the additional muscle that they carry.

The chest muscles are arguably one of the most difficult to build in the human body.

So, for an athlete to prioritize building it, he will have to greatly increase the hours he puts into strength and weight training, which will increase the risk of injuries.

To be very clear, having huge chests could very well translate to having a high punch power, especially when you consider some of the fighters listed above, but when you also look at fighters like Deontay Wilder, or Conor McGregor who do not have massive chests but are capable of shutting anyone’s lights out in a second, it certainly means that there’s a lot more to punching power.

And when you also take into account the dangers that could accrue from having huge chests, then you will certainly be better served working on other muscles.