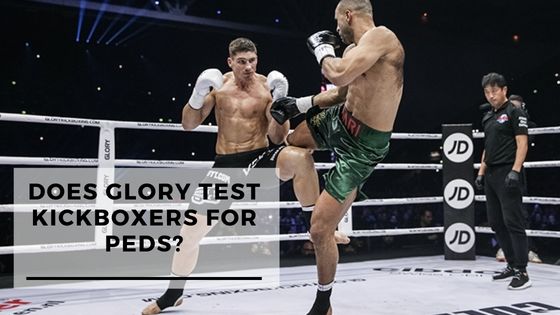 Glory is not strict in testing kickboxers for PEDs (including steroids).

Glory holds events worldwide where kickboxers get tested only the day of the competition by the governing bodies in these countries e.g. State Atheltic Commissions in the United States.

Testing kickboxers only on the day of competition makes it so easy for them to cheat. Many kickboxers go through steroid cycles all throughout the training camp, then they go off cycle during fight week.

Once they go off the cycle, it’s easy to get tested on fight day and still pass the test, because the amounts of steroids in the blood become untraceable.

Other athletes don’t go off the steroid cycle and simply use masking agents to pass the test. There are substances that athletes use to mask the steroid in the blood.

So the answer is, Glory doesn’t have an effective drug testing program and basically every kickboxer can dope without having to fail the test on competition day.

So the answer is, Glory doesn’t have an effective drug testing program and basically every kickboxer can dope without having to fail the test on competition day

It is worth mentioning that Glory has partnered up in 2018 with the Dutch testing agency “Doping Autoriteit Netherlands (DAN)” to clean up the sport from PED users and protect kickboxers who are natural.

This partnership led to catching some big names in the sport including:

Although this partnership was a bit fruitful and managed to catch some big names, the Glory anti-doping program is still considered ineffective due to the fact that fighter get tested only on fight day.

What should Glory do to make its anti-doping program effective?

There is one way and one way only to make any anti-doping program effective, this way is all-year-round testing.

This is what the UFC is doing with its partnership with USADA. Fighters are tested all year round on a random basis.

There is an application that fighters have to use on their phone all the time to disclose their location so USADA can know where they are and surprise them with a drug test if they want.

Random testing makes it very hard for fighters to cheat, but it also requires lots of financial resources because USADA agents have to travel worldwide to test fighters regardless of where they are.