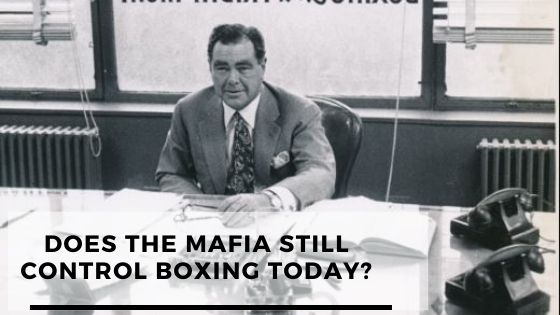 Boxing has a dark history of gangsters, fixed fights, and mysterious murders.

There was a time when the mob ruled the sport from within, using their financial power and widely feared reputation to fix fights.

More than any other sport, boxing has a history of being simple to rig, because there are just two players, and one or both might be bribed.

If not the combatants, the judges or referees could be misled.

Under such favorable conditions, the gang went into Boxing in the 1930s and benefited by contaminating a sport ripe for exploitation.

How did it all start?

The mafia first became active in boxing in the late 1920s.

With their International Boxing Club ties and their association with its crooked chairman, Jim Norris, they dominated Boxing in the 1950s and 1960s.

The courts disbanded the IBC, which cost the mob part of their hold on the sport.

When individuals like Frankie Carbo and Blinky Palermo were put to jail for 25 years, it did a great deal to clean up mob domination in Boxing.

What role did the mafia play in the sport of Boxing?

The mafia managed championship fights and rigged title opportunities, due to this reason the best contenders rarely won the title (because they never had the chance).

Jake LaMotta only earned a shot at the championship after throwing about over Billy Fox!

He gave testimony in a congressional hearing!

Does the mafia still exist?

He has managed some of the world’s premier boxers, including Tyson Fury, a two-time world heavyweight champion, and he mingled with royals and politicians.

The truth is that the mafia still controls Boxing.

There are numerous news and incidents, which make us believe that the mafia still exists.

Now, they have changed their ways to control this industry

The old-fashioned mafia, the days of a pair of thugs showing up in a boxer’s locker room and telling him to throw about in a given round are over.

Everything is much more sophisticated today.

Today the promoters, networks, cables, and venues are all under the authority of the mafia.