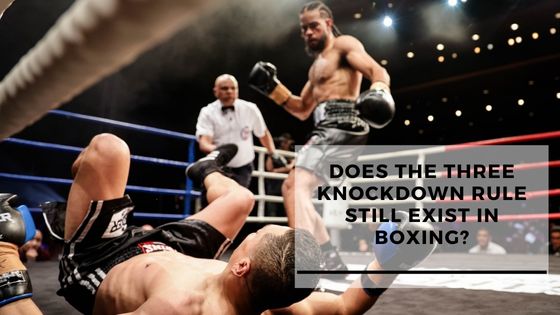 The 3-knockdown rule states that if a fighter is knocked down by his opponent in a single round three times, the referee is mandated to stop the fight, and thereby declare it a TKO loss.

One of the most high-profile losses by this rule was in the Takashi Uchiyama and Jezreel Corrales fight in 2016.

In the fight, Corrales dropped Uchiyama twice in the second round, before one final knockdown prompted the referee to stop the fight.

But in recent times, the rule has become obsolete in title fights after the Association of Boxing Commissions stated that the rule will no longer be in effect.

Take the Pacquiao vs Marquez fight, for instance, Marquez was knocked down 3 times in the first round, and the referee allowed the fight to carry on; at the end, the fight was declared a draw.

In non-title fights, the following states still have the three knockdown rule in effect:

Regardless of this recent change, some people are of the opinion that the rule should be reinstated, while others prefer the rule to remain obsolete.

Here are some of the arguments for and against the rule;

Arguments for the 3-knockdown rule

The main argument for the rule to be brought back into consideration is fighter safety.

Think about it, anyone that can get rocked and knocked down 3 times in a 3-minute period is certainly hurt and should not be able to continue, as such, bringing back the 3-knockdown rule will improve the fighter’s long-term safety.

Arguments against the 3-second rule

The argument against the rule is also very simple, every fighter deserves a chance to go out on his feet. That’s the whole point of fighting, isn’t it?

If the Pacquiao vs Marquez fight was ended in that first round, then Marquez wouldn’t have had the opportunity to rally and secure a draw.

So to this set of people, removing the 3-knockdown rule would aid the fighter to be able to make a comeback, as well as make for longer fights.

Regardless of your stand on whether the 3-second rule should be brought back or not, you can’t deny the counterclaim, as they also make a valid point.

But fighter health should be a priority for boxing organizations, as such, bringing back the rule will certainly be of benefit in the long term for the fighters.