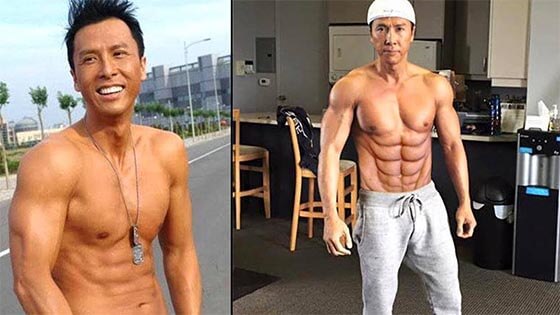 Donnie Yen at the age of 3 with his parents Klyster Yen (father) Bow-sim Mark (mother) in 1966.

His mother was a Tai Chi master and his father was a newspaper editor.

This photo was taken when the family moved from Guangzhou -where Donnie Yen was born- to Hong Kong.

Donnie Yen with his mother Bow-sim Mark at the age of 6.

Yen’s mother has been an iconic figure of chinese martial arts in the US.

She was one of the pioneers who worked on popularizing Tai Chi and Wushu in the US when she moved to Brighton, Massachusetts in 1975 along with her family.

Black Belt Magazine named Bow-sim Mark one of the most iconic figures of Wushu and Tai chi in the the last 50 years.

Chris Yen is also a prominent martial artist, she has many accolades in Wushu and Tai Chi.

Chris Yen is also an actress, one of her best movie appearances was in Adventures of Johnny Tao: Rock Around the Dragon.

At the age of 9 he transitioned to Wushu, a branch of Kung Fu.

When Yen was 15, he dropped out of school to pursue a career in martial arts.

His parents supported him in his quest and sent him to train in China with the national Wushu team.

He spent two years and a half learning Wushu in different schools in China, he also spent some time in Shaolin Monasteries to learn meditation and the spirit of martial arts.

This photo was taken in Hong Kong after Donnie left Beijing and came in a side trip to start networking for a movie career.

At this period, Yen started training taekwondo to perfect his kicks and make them look spectacular for Cinema.

After a long struggle, Donnie Yen made his breakthrough in the film industry.

His first significant role was in the movie Drunken Tai Chi

The film industry in Hong Kong has quickly noticed the talent of Donnie Yen.

At this time, Donnie was still taking second roles, but he proved himself and climbed up the ladder.

He starred as General Nap-lan in 1992 blockbuster Once Upon a Time in China II.

Once Upon a Time in China II was the real beginning of the prominent career of Donnie Yen.

The movie included a fight scene against the character Wong Fei-hung played by Jet Li.

Yen started dating Leung Zing-ci, in the early 90s. They dated for 4 years then married in secret after Yen found out that his girlfriend was pregnant with his first son.

Their marriage didn’t last long and they divorced after only one year of marriage.

After his divorce, Yen suffered severe depression and decided to stop dating.

he shifted all his focus towards his acting career.

At this period, Donnie starred in the TV series Fist of Fury. The movie was adapted from Bruce Lee’s movie Fist of Fury.

Donnie Yen was not unidimensional, he didn’t limit himself in martial arts action movies, he also starred in romantic movies.

By the age of 39, Donnie Yen built his own production company and debuted in directing.

The films that Donnie directed were critically acclaimed but unfortunately for him, they failed miserably in the box office.

At a certain point, he found himself with no funds and was forced to get loans from loan sharks with extremly abused interest rates to get by.

Yen also borrowed money from his own production crew.

The couple dated for a year and a half then eventually got married.

Donnie Yen’s wife was a big boost to his career, she was a huge support for him during his financial crisis.

He finally decided to shut down his production company and pursue his acting career.

In 2002, Donnie was invited to join the cast of Hollywood blockbuster and Marvel Comics movie Blade II.

Aside from portraying the character of Snowman in Blade II, Yen was also a main choreographer for fight scenes.

At the age of 44, Donnie Yen transformed into the new shape we all know him at now.

He received an invitation to star in the movie The Expandables, unfortuanetly he was already commited to another role, so he declined the offer.

After a long career, Donnie Yen decided at 44 to take a hiatus from acting in order to spend more time with his family.

He took a break of one year. He said that he was tired of being often away from his children missing seeing them growing up.

He conquered the hearts of martial arts fans and Wing Chun enthusiasts around the globe when he portrayed the character of Ip Man, the legendary Wing Chun master.

Both legends made several appearances together in festivals and sports meetings around the World.

The movie Ip Man was warmly welcomed by martial arts fans around the World, which led to its sequel IP Man 2.

Even though Donnie was focused on perfecting his Ip Man saga, he was still starring in other great films

Donnie Yen is a star in both Hollywood and Hong Kong.

Although he was starring in Hollywood, he always kept strong relationships with the Hong Kong scene.

In 2011, he starred in the Hong Kong blockbuster Dragon.

The film was a huge success in China and grossed over 110 million yuan (US$15.7 million) in its opening week

Donnie Yen starring in the chinese film Special ID where he played the character of an undercover officer infiltrating a dangerous chinese gang.

Donnie continued to amaze his fans by showing his multitalented skills and starring in 3D martial arts action-comedy film The Monkey King.

The film was a critical success and won multiple awards in festivals around the world.

Then the big surprise came for Star Wars fans!

It seems that Donnie stopped aging at the age of 30.

Donnie seems to be gaining more muscles with age.

His wife said that Donnie is extremly disciplined in his life. He has a strict schedule and he follows it religiously.

Yen at his 56th birthday surrounded by family and friends

At the age of 56, Donnie is still in his prime shape.