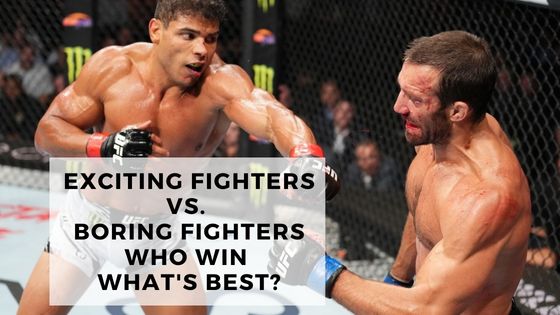 So, should you as a fighter focus on exciting the crowd, or should you win even if the win is boring?

Winning is the pillar of every fighter’s career, but if you always win in a very boring fashion, you will become an enemy of the promotion and fans would be indifferent.

What happens to boring fighters who win fights all the time?

These types of fighters become enemies of the promotion they are fighting for, simply because they keep winning and destroying every fighter who has the potential to be a star for the organization, without being stars themselves.

In a way, they are working against the interests of the promotion itself by destroying its stars without being a star themselves because fans don’t care about their boring style.

The problem with making an enemy out of the promotion is that once the fighter experiences their first loss they get cut from the organization instantly and their career dies because no other organization would want to contract them because of their boring style.

What if your fighting style is boring, but it keeps winning you fights, should you change it?

No! If your fighting style is boring, but it keeps making you win fights, don’t change it, that would be a big mistake!

Instead, learn from the fighters who came before you.

Take Colby Covington as an example.

Colby was on a long winning streak with his wrestling style, but the UFC informed his manager that they would cut him anyway because of his boring style.

Colby Covington then took the decision to add something new to the mix, trash talk.

He kept the same fighting style and didn’t change anything, he kept winning and destroying other potential stars, but he added the element that fans love, the excitement of trash talk.

Suddenly, he became a star in the UFC and the UFC loved him.

Don’t sacrifice your record for MMA promotions, because once you will have a 3-fight losing streak they will cut you anyway, and you’ll find yourself jobless.

So don’t sacrifice your record for anyone.