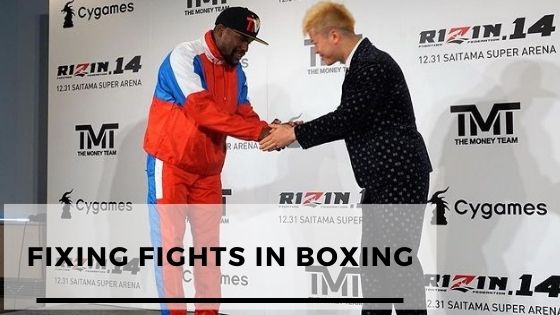 Match-fixing or fight fixing is a phenomenon that has existed in boxing and combat sports in general since the beginning of time.

It occurs when the results and the outcome of a fight have already been predetermined before the fight, by either the referee, the judges, or even the fighters themselves.

Among all combat sports, boxing has developed the worst reputation for having a large number of its fights fixed, given this.

It becomes pertinent to take a look at some of boxing’s highest-profile fights that were “proven” to have been fixed.

1. Mohammed Ali Vs Sunny Linston 1 and 2

Perhaps surprisingly, the first name on our list is none other than the great Mohammed Ali.

Well, in both 1964 and 1965 at the early stages of his career, there were serious allegations of match-fixing.

Against the same opponent.

In the first fight, it was rumoured that Linston was intentionally blinded by his cornermen, while in the second fight, there were allegations that he sold the fight on purpose.

Although there was no concrete evidence to support this claim to date, many believe that the bouts were fixed.

There is a saying that if something works for you, you do it again, and that’s exactly what Harry Thomas did.

Even though he confessed to it in 1940, both fights were ruled as no contests.

One of the few occasions when a fighter was duly punished for attempting to fix a fight.

In 1957, Goldstine reported to the National Boxing Association that he had been offered $500 by Aragon to take a dive.

Following this, the fight was cancelled as Aragon “comically” claimed that he was sick.

After proper investigations were conducted, Aragon was sent to a five-year sentence in the California State prison.

There could easily be an entire article of fixed Mayweather fights, with the likes of the McGregor fight, and the Logan Paul fight gathering a lot of negative pr, but none has reached the level of his exhibition bout against Nasukawa.

The fight was heavily criticised as being fixed with Nasukawa comically stumbling around the ring after each punch, and Floyd even going as far as dancing in the ring at some stage.

Although no proof was discovered, the fight is certainly worth a mention.

So, this is how far we’ll be going today.

If we begin to trace the total history and presence of fixed fights in boxing, there could be hundreds and hundreds of fights.

It might not paint a good look on the sport, but is certainly something that is here to stay for the foreseeable future.