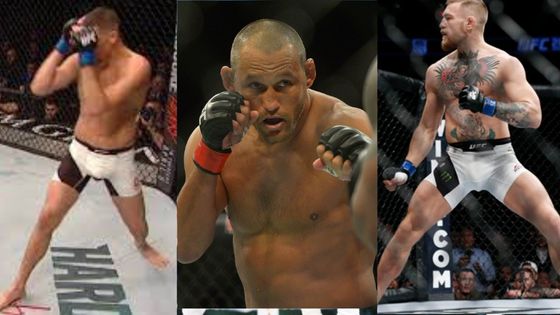 When you start training in MMA, the first thing you’ll learn is how to guard. It’s the basic form of protection when fighting, and it’s essential for defense.

Once you master the most simple or common one, you can learn different types of guards that can work better in different scenarios, depending on your skills and fighting technique.

Guarding forms vary in every discipline, and some of them have very specific names and characteristics. In MMA the most basic ones are the high guard, middle guard, and low guard

As their names suggest, the only difference in form between them is the height at which you’ll position your hands. But they can work differently depending on the context.

So today we’ll compare them, looking at their pros and cons to determine if they’re actually that apart one from another

What is a high guard in MMA? What are the pros and cons?

Also known as the double guard, it is made by placing both hands on your temples, palms facing inward and with your shoulders squared.

In this position, since you have your hands so upfront, your body weight tends to be slightly forward.

Pros of the high guard

This guard gives security and a quick offensive response. While using this guard, a fighter has almost full coverage of the head area.

Also, this guard makes it easier for the fighter to throw quick jabs and straights because their arms are already placed at the right height.

It also positions the body for easy upper-body blocking, stop-hits, and block-counters, making it a perfect mix between attack and defense

Cons of the high guard

Holding your arms up consumes a lot of energy, which requires great resistance from the fighter. If the forearms are not correctly positioned, your hands form a kind of tunnel for your target.

As there’s extra weight on the upper body, the head movement can become slower or clumsy, leaving your body exposed.

Besides, your gravity center is higher, making takedowns easier for your opponent

What is the low guard in MMA? What are the pros and cons?

Called half guard as well, it consists of dropping your lead hand in front of your stomach, sometimes even below the abdomen, and placing your rear hand on one of your cheeks or even at chest level.

In this case, defense is achieved by blocking, parrying, ducking, and slipping, all with good footwork.

Pros of the low guard

One of its biggest advantages is vision. Having your lead hand under your field of vision gives you a perfect sight of your opponent’s position, stance, and moves.

It also gives great mobility and freedom to the lead hand and offers some extra distance for your strikes, which translates into more momentum when punching.

A low guard works better against takedowns and kicks, it also saves more energy than a high guard.

Cons of the low guard

It leaves your head and chin unprotected, making the chances of receiving a clean punch or kick higher, which can easily mean getting knocked out.

This implies a lot of head and core movement to avoid strikes, so you could end up investing the energy you save with your guard, on moving around the cage.

What is the middle guard in MMA? What are the pros and cons?

Also known as a mixed guard. As you might have guessed, it’s a midpoint between a high and a low guard.

There are some different hand positioning that would be considered as middle guard, but the most important one is:

Your rear hand stays up protecting your chin and face, and your lead hand also stays up but stretched like you would have it in a low guard.

Pros of the middle guard

The stretched arm creates distance between the fighter and his opponent, and it’s also perfect for hitting quick jabs, or making fast faints with the lead hand.

It’s similar to a standard kickboxing stance since it leaves your center of gravity a bit higher. Taking this into consideration, the lead hand faints we mentioned can easily precede high kicks.

Cons of the middle guard

Since both arms are positioned above the abdomen, this guard creates a lot of space for an opponent’s body shot.

Its higher gravity center can cause a problem as well, just like with the double guard, leaving you open for a takedown and hindering head movement and balancing.

So, what kind of guard should I use then?

Guards are just like game plans, you will never see a high-level fighter approaching every fight the same way and having one single game plan for each fight.

The same goes with guards, you should be adaptable and learn them all. Once they are added to your arsenal, you will be able to have different guards depending on the type of opponent you face.

If you master all guards very well, you might be able to switch guards even in the same round to confuse your opponent or to respond instantly to their game plan.