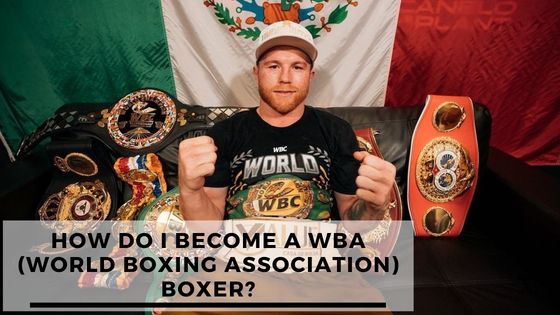 There’s no gainsaying that every amateur’s dream is to go professional and fight against the big boys in boxing. Professional boxing is the ultimate peak in boxing; it is the crème de la crème.

One of the steps to take in becoming a pro boxer is to join one of the professional boxing associations.

We’ll be beaming our spotlight on WBA and discussing how boxers can become a part of the professional body.

The WBA founded in the United States was formerly called the national boxing association (NBA).

No, it wasn’t changed to WBA because it resembled the national basketball association (NBA).

It changed to WBA in recognition of the growing popularity of boxing worldwide and thus, began to add members from other nations.

The WBA has been around for a very long, among the four major professional boxing associations, it is the oldest – founded in 1921.

How to become a WBA boxer?

Every boxer starts at the lower rungs of the ladder before finding their way up.

Boxers start engaging in fights locally, at their local gym or youth competitions before they begin amateur boxing.

At the amateur level, boxers join a local amateur boxing organization where unsanctioned fights are organized.

Amateur boxing organizations require basic physical tests to determine the state of health of the boxer, after which application forms are filled, necessary documents are provided and a sign-up fee is paid.

A license is given to the boxer to participate in fights organized by the organization.

An amateur boxer climbs up the ranks by winning match after match and getting noticed by top promoters.

The journey from amateur boxing to WBA varies in terms of length from boxer to boxer.

Some boxers might have it easy and move up to WBA in record time, while some spend years as amateur boxers before WBA.

WBA boxing is the next and final stop after amateur boxing.

Just like amateur boxing organizations, the WBA requires boxers to go through physical exams to determine their mental and physical state.

If a boxer passes these physical tests, then an application form is signed and a sign-up fee is paid.

After all these, the boxer is issued a license to partake in fights organized by the WBA.

These fights are grouped by weights.

There are 17 weight classes in the WBA;

An example of this is Canelo Alvarez, who holds the super middleweight belt in all four major professional associations – WBA, WBO, WBC AND IBF.