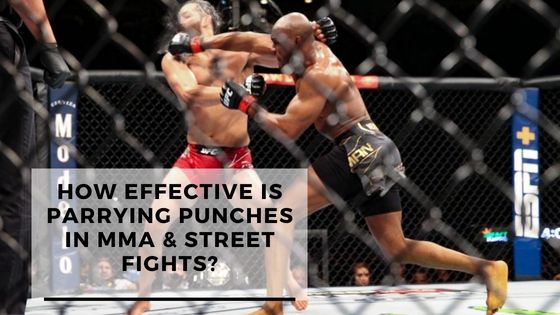 Parrying is a technique that comes from fencing, in which you use your sword to deflect your adversary’s attacks, diverting them in another direction.

In combat sports like boxing we can apply the same principle, using it as an alternative to blocking since it uses the opponent’s momentum and leaves your hands free to counter-attack.

Boxers use big and bulky gloves that protect their hands, and allow them to parry punches easier, since the opponent’s glove kind of bounces or slides away, avoiding hard contact.

But in scenarios where you don’t have that kind of equipment like MMA fights, or even more extreme situations like a street fight, is it a useful technique?

How effective is parrying punches in MMA?

Parrying is a commonly taught technique in MMA, but it’s not that used in a fighting context.

MMA fighters use smaller and lighter gloves, so blows hit a lot harder and faster, and parrying them can be quite difficult and also risky.

It might be useful to defend against short strikes like a jab since blocking can result in hard damage.

In that case, parrying the jab and quickly returning with the same hand can be a good combination.

Now with straight blows, it’s a different situation. We recommend slipping them since harder strikes may come through the parry, and the slipping part also applies to uppercuts and hooks.

These last two can be especially hard to parry because with curved punches it is harder to predict a trajectory, which is an essential part of this technique. Slap-down parries could work better than a deflection parry, but we still don’t recommend them.

How effective is parrying punches in a self-defense situation?

Moving to street fights, we have similar thoughts, adding the fact that equipment here is probably inexistent.

When fighting in such a chaotic and dangerous scenario, the smartest thing to do is to avoid punches as much as you can.

In that order, parrying might require a bit more concentration than your brain could manage with all that adrenaline rushing, and just the smallest contact can bring fatal consequences, so it might be better to keep distance and slip strikes.

How to parry in MMA?

Should I stop practicing parrying then?

Martial arts share lots of similarities, but also have many differences.

Although some practices are common in different disciplines, not all of them work in all cases. It depends a lot on the characteristics of each sport.

Despite that, we encourage training as many skills as you can, so you can decide whether to use them or not depending on your necessities and capabilities. In the end, it all depends on context, every fighter has their own world.