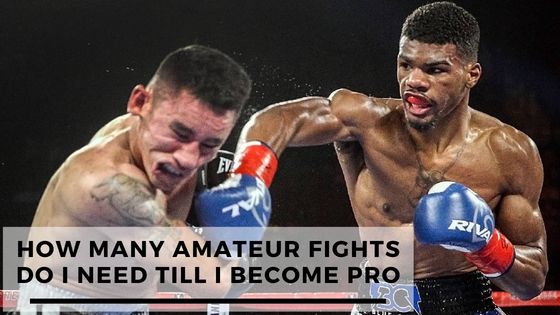 In one of our previous releases, we examined carefully the differences between amateur boxing and professional boxing as they may look the same to new followers of the sport.

For amateur boxers or aspiring boxers, the primary aim is to end up as a professional, no one wants to just compete as an amateur without making the big jump.

The idea of making thousands and millions of dollars yearly, and achieving well-known status and popularity in the world is a dream for most amateurs.

The likes of Floyd Mayweather, Tyson Fury and Deontay Wilder all had stellar amateur boxing careers before going pro.

So, for the young ones asking themselves how many fights they need, this is for you.

In reality, there is no definite number of amateur fights and wins a fighter should have before turning pro, as it varies between fighters.

Floyd Mayweather had a total of 92 amateur fights with 84 wins before he finally went pro.

So as you can see, the number of fights varies differently with each fighter, but judging by the above number and other real-world criteria, 30-35 amateur fights should be ideal.

30-35 is ideal because it would have given the boxer ample opportunity to get familiar with boxing rules and experience, as well as hone their technique and craft, without necessarily taking too much damage.

But most importantly, you want to seek counsel with your boxing coach, as he would be in the best possible position to instruct you on whether you are ready for the “big leagues”.

Once you and your coach have decided on whether its time for you to go pro, you need to realise that there are a ton of differences between amateur and professional fights.

And as such, you need to be supremely prepared. Some preparation criteria are talked about below;

This is pretty self-explanatory, isn’t it?

By sparring with pros, you will be able to measure and test your skill level.

Every effort you used to put into training as an amateur must be doubled when you decide to become a pro, this is because of the step-up in competition, as well as change in rules.

This is perhaps the most important; in amateur boxing, the technique is prioritized when judging.

This is opposite to professional boxing which prioritizes aggression, ring control, or knockdowns ahead of technique.

You will need to be able to switch your mentality from a more conservative, technical approach, to a more aggressive, dominant one.

The jump from amateur boxing to professional boxing can be a really big one, regardless of whether it’s the same sport or not.

And as such, it needs to be done with patience and a lot of careful planning, because doing it wrongly could lead to your career as a boxer ending in tatters.