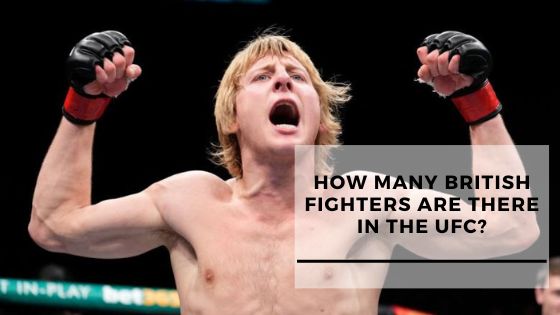 MMA is a sport that has garnered major attraction in recent times, and different nations have been represented across the octagon in the UFC, from the US all the way to Nigeria in Africa.

British fighters have not gotten as much attention, so let’s look into the British representatives in the UFC.

There are currently 24 British fighters both men and women across the UFC ranging from bantamweight to heavyweight.

This list might be outdated, as the UFC is always recruiting and signing new talent around the world.

Who are these British fighters?

This list will show the fighters in their various weight classes:

The Scouse-born fighter who stands at 6ft is a middleweight class martial artist who made his competitive debut against Wendell de Oliveira Marques with a 9-day notice, but still won the bout by knockout.

Born in Wigan, England is currently number 6 in the UFC heavyweight ranking, is a heavyweight mixed martial artist with a record of 12 wins and 2 losses.

A 6ft 4in powerhouse born in Airdrie, England, he currently fights in the UFC as a light heavyweight with a record of 16 wins-4 losses-1 Draw.

Born in London, England, he has competed in the Light Heavyweight and middleweight categories in the UFC.

His record of 22 matches with 12 wins- 8 losses – 2 No contest results does not make for great reading, but he has had some stellar matches in his career.

The first Welsh fighter ever to be signed by the UFC, Jack who has been nicknamed “Hammer” was a Lance corporal in the British army where he served for 10 years, in this time he was involved in some UC fight nights that he was cautioned for by the army.

His record currently sits at 33 fights 23 wins and 10 losses.

British fighters in other MMA promotions

There are several British fighters in different MMA promotions.

In the heavyweight class, Paul Elliot A.K.A. King of the North from England.