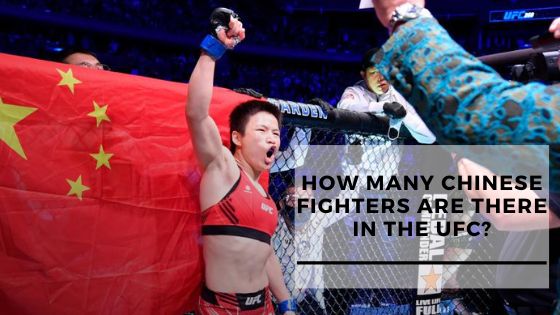 There are currently 12 active Chinese MMA fighters in the Ultimate Fighting Championship.

Zhang Weili will always be a part of Chinese MMA history as the first ever Chinese-born UFC Champion.

Zhang also picked up on Brazilian Jiu-jutsu before making her MMA debut in 2013.

Thought to be related to Zhang Weili, Tiequan was the first Chinese MMA fighter to appear in the UFC.

Tieuan started out in MMA as a young boy in Mongolia and was recruited by One of the top academies in China.

Before going to the UFC, he had stints at Art of War Championship and World Extreme Cage Fighting and finally made the switch to the UFC.

Su Mudaerji from childhood always had a passion for sports, especially combat sports where he gained traction from the age of 14 years in the Endo fighting club.

He would also learn the Sanda fighting style while participating in a few tournaments that would eventually lead him to transition to Mixed Martial Arts.

Su would eventually make his debut in the UFC in 2018 fighting in the Flyweight and Bantamweight Divisions.

The Mongolian Knight as he is known is another Chinese Mixed martial artist that has taken the UFC by storm.

Alateng would develop his love for MMA after a talents scout picked him to join a team in Beijing.

He began his MMA career in the Asian circuit where he fought in several organizations of note, with his increasing record of fights he would get scouted and later joined the UFC, making his debut against Danaa Batgerel in 2019.

Other Chinese fighters in the Ultimate Fighting Championship:

Why aren’t there many UFC fighters from China?

China is home to some of the most fascinating fighting styles, ranging from Shaolin Kung-fu to Sanda and other styles.

Although the country has had an influx of MMA fighters, the UFC which is technically the biggest MMA promotion in the world does not have a huge influx of Chinese fighters.

The main reason why there are not that many Chinese or Asian fighters is that a lot of Chinese MMA fighters are in promotions that are in their home country and with a family-based culture such as the Chinese making the long trip to the US is not always the most appealing to them.