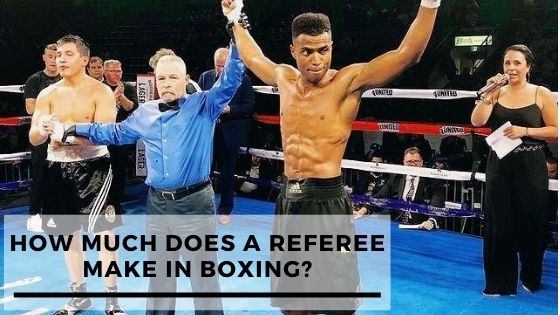 The bulk of fans’ attention is directed towards the two other men slugging it out in the ring.

The work of referees in boxing is no easy one.

This job of theirs involves precision, right judgment calls and a sharp eye to spot infringements.

It is only fair that they get remunerated adequately, because from whom much is expected, much is given.

It is important to note that referees are paid on a match by match basis and this is calculated into yearly earnings depending on the number of matches officiated.

Some of the factors that determine the pay of referees are:

As seen in other sports, referees have to go through intensive training on the dos and don’ts of the game.

This set of referees have years of experience under their belt and have gone through the ropes in terms of training and interviews.

Professional boxing referees are chosen to preside over the big fights as they have more knowledge about the rules and regulations of the game.

Amateur referees are new to refereeing and have little knowledge of the rules and regulations of boxing.

They start by volunteering for amateur fights before rising up the ladder and have between 1-2 years of experience.

The fight location determines to a large extent the amount a referee receives.

The United States of America is known as the headquarters of boxing matches, as it has hosted many world title bouts.

As a result, the average pay for referees is highest in America than in any other country.

There’s no doubt whatsoever that the fight itself is a major determinant of the salary of referees.

The hype around the fight and the boxers involved does contribute a lot to the earnings of the referee.

Boxing matches between the likes of Mayweather Jr and Pacquaio or Anthony Joshua and Deontay wilder are likely to rank high in terms of payment to referees.

One of the highest earnings by a modern-day referee was recorded in the fight between Mayweather Jr and Pacquaio, the referee – Kenny Bayless was reported to have made close to $10,000 for that match alone. Wow!

Some of the referees that rank as the highest earners include.