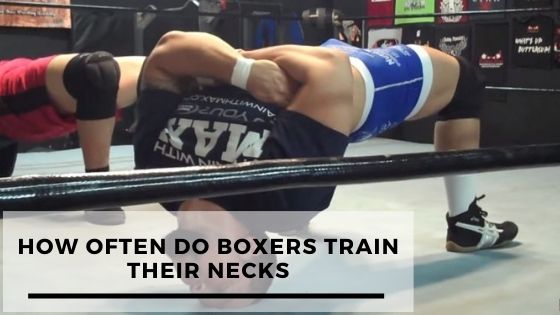 Cast your mind back to 1996 when Mike Tyson had just been released from prison.

There was a new sense of focus around him, and he looked supremely jacked with reports that he had less than 20% body fat.

But one thing stood out, and that was his extremely wide and muscular neck.

He had returned from prison with a neck width that was reported to be over 20 inches, and in no time, he recaptured his heavyweight championship belt.

So how did he achieve such a neck size, and how important was it to him to achieve his championship status again, because if it worked for him, it can certainly work for other boxes around.

If you’ve read our previous article on the physiology of getting knocked out, you would remember that it’s as a result of a punch or hit causing the brain to move around inside the skull before settling in a state of rest and causing the fighter to be out cold.

Neck training prevents this because bigger and wider necks would not only cushion the punch, but it would prevent a “whiplash” effect that would have resulted in getting knocked out.

When you look at an “iron chined” like Canelo Alvarez constantly working his neck, you begin to understand why.

In the sport of boxing, you are constantly getting punched or jabbed in the head.

This series of actions continually snaps the head backwards, and if your neck isn’t properly trained, you run the risk of getting injured a lot faster.

A lot of the respiratory functions occur within the neck and are aided by the neck muscles, so fighters that prioritise neck muscles will be able to perform better over long periods in a fight.

There are still other advantages to neck training, but the above is the most comprehensive.

So, in our next sub-section, we’ll be looking at some of the most effective neck exercises, and how often you should do them.

When one thinks of neck exercises, this is usually the first that comes to mind, It is usually like a head tie that has a weight attached to it.

When worn, you lift your head in an upward and downward motion.

One of the neck workouts Mike Tyson was famous for.

You lay down on your back, and you raise your entire body using only your head.

As it might be extremely difficult at first, you can use your hands to support your head till when you are a lot more comfortable with it.

To execute this exercise, you attach a band to your hand and hang it on a fixed object, then you lift dumbbells and match forward in continuous motion.

This exercise replicates real-world situations where the boxer is in perpetual motion.

This exercise is done by bending your neck and head slightly downwards and lifting two dumbbells with each hand.

You should do 3-5 sets of about 10 repetitions.

So this is where we leave it for today, neck exercises are one of the most strenuous exercises around, but they’re arguably the most important.

The difference between a normal fighter and a truly great fighter could be his/her ability to take a punch as much as anything, and as you have read, neck exercises certainly guarantee that.