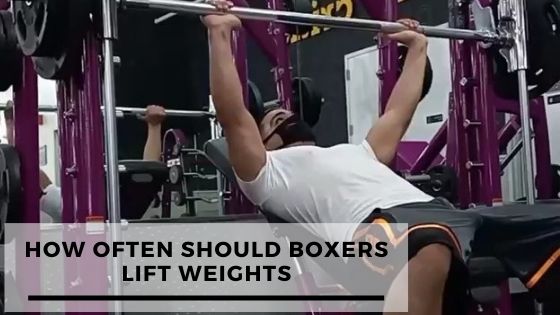 Weight lifting, otherwise known as strength training has had a rather topsy-turvy relationship with boxing and combat sports in general since when boxing legally became a sport.

In the past, many were of the opinion that boxers shouldn’t engage in any form of strength training, as it could be counterproductive.

But in recent times, there has been more of an acceptance of the importance of weightlifting for fighters.

To this effect, we’ll be looking at how often boxers lift weights, and how to do so properly to achieve maximum performance.

Weight lifting for boxers is a lot different from the traditional way.

With boxing, there has to be less of an emphasis on trying to gain more muscle mass and more of an effort on improving speed and increasing punching power.

This is because focusing primarily on bodybuilding causes muscle contraction which reduces speed and power.

So in essence, the aim is to get more powerful, without necessarily looking too bulky(minimal hypertrophy), some of the weight training exercises to achieve this is.

This is important because it increases explosiveness and power without causing weight gain.

This is important because the trap bar deadlift targets two extremely crucial areas of the fighter.

The legs and the back.

And you should know that the ability of a boxer to generate power doesn’t just come from the hands but from the hips and the back.

Now you’ve gotten some level of power from the previous exercises, but what good is it if you can’t direct that power appropriately?

This is where landmine punching comes in.

When you lift the landmine back and forth, your hands become more used to transferring and directing power efficiently.

This is really important for fighter speed and power.

Shadowboxing under difficult conditions like with weights makes the arms and shoulders more accustomed to stress, which will pay dividends in the later rounds of a fight.

While there are still other strength and conditioning workouts available to boxers, the above are some of the most crucial and important ones that would yield the best possible output.

For the best possible gain for a fighter, performing strength training 3 times a week is ideal, with the reps of each dependent on what the fighter aims to improve.

Anything more than this could cause varying problems for the fighter like;

Fight camp is usually a six to eight week period before a fight where a fighter uses to train and prepare for the upcoming bout.

Because regardless of the potential benefits to boxers from weight training, the potential effects, especially close to a fight should be taken into more consideration.

So this is where we leave it for today, weight training has a raft of benefits that are accrued to the boxers.

But if not executed properly and efficiently there can also be a lot of consequences which could impede the fighter before the fight, and even during fight night.