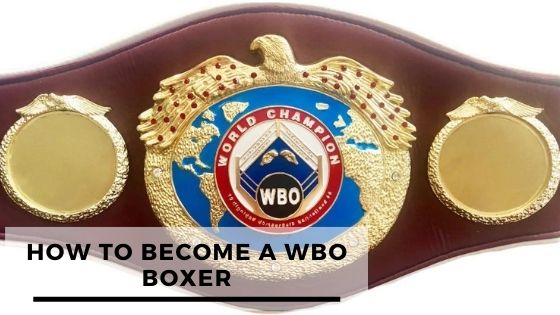 Fighting under the WBO( World Boxing Organisation) is the dream of any prospective boxer, it is one of the top four boxing organisations in charge of sanctioning fights, alongside the WBA, WBC and the IBF.

As it is at the pinnacle of boxing promotion, fighting under events sanctioned by the organisation is an achievement for many boxers in itself.

This is why we’re going to be talking about how to become a WBO boxer.

N.B: You should know that you can’t necessarily “enter” the WBO, or become a WBO boxer, you can only be recognized by them and fight in events sanctioned by the organization, so let’s get into it.

Before you can think of being recognised by the WBO, you have to first become a professional boxer.

To achieve this, all you have to do is visit the boxing commission within your state of residence, and apply for a professional boxing license.

During application, you’ll meet with a professional doctor or medical personnel who will conduct the following tests;

If the examination and tests are approved by the doctor, he/she will sign the paperwork, before sending it back to the State commission, upon approval of the paperwork.

You would be required to pay a fee, which is to be renewed annually, once this is done, you can call yourself a professional boxer and begin to look for fights.

But this is just one side of the journey, becoming a professional boxer isn’t enough, you want to fight under the biggest organisations, like the WBO for example, but doing this is not an easy feat.

For starters, you want to build a pretty healthy boxing record with a wide array of knockouts, doing this will rapidly increase your star power and get people talking about you in the boxing world.

Then comes the next step, you want to try to get into fights with boxers already recognised by the WBO.

By getting and beating boxers that are already in the WBO’s fighter pool, you’re making a solid claim that you deserve to be there just as much as them.

Now comes the last part; in our world today, you should know that having connections is the key that can unlock any door of opportunity.

At this point in your career, you would need to have generated a form of rapport with promoters that are affiliated with the WBO, or have a high level of popularity.

I know we said that was the last part, but this is just as important; You’ve got to have the right management.

Having the right management could be the difference between your career stagnating, or skyrocketing.

So, that’s where we leave it for today, if you are an amateur or a prospective boxer, you can be certain that if you follow the above steps, you would be fighting under the WBO in no time.