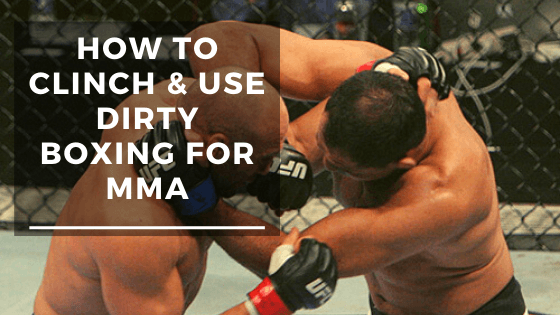 For many MMA casuals, fights become boring once the fighters are stuck in a clinching exchange against the cage.

For the untrained eye, the fighters are just hugging each other and waiting for the referee to interfere and separate them, but for the fighters themselves and their trainers the clinch game is a huge part of the game, if played correctly, it can be decisive for a fight’s outcome.

In this article, you will learn the best techniques for clinching and dirty boxing:

Why should you clinch?

If you want to clinch your opponent against the cage for offensive reasons, you have to have a purpose for that.

Every move you decide to use in your 15 minutes MMA fight should have an intention behind it.

These are the reasons why many fighters choose to engage in a clinch:

The best example that comes to mind is Cain Velasquez Vs. Dos Santos 2.

Cain is a wrestler with an endless gas tank, on the other hand, Dos Santos is a very explosive fighter with godly knockout power. Cain had already tasted that power in their first fight, as he was knocked out at the 64th second of the first round.

In their second rematch Cain Velasquez came with a great strategy, he decided to wear Dos Santos down with the clinch and weather the storm.

The strategy was successful and within the second round, Dos Santos started to fade out, and that’s when Cain started to dominate the fight. Cain ended up winning the fight by decision with a one sided beating

You will see that at almost every MMA event, one fighter will get stunned by a blow and they will close distance and look for the clinch to avoid receiving more blows and allow themselves time to recover.

If you are the one who gave the stunning blow, don’t accept to engage in a clinch, if your opponent grabs you, disengage immediately and finish your opponent with accurate and well-picked strikes.

Khabib Nurmagomedov uses that a lot in his fights, he often pushes his opponents against the cage to set up his takedowns.

When your opponent has their back against the cage, they have nowhere to go, and you get more control of their hips. The hips are the center of your opponent’s gravity, and to take your opponent down you have to play with their center of gravity.

If your opponent is standing in the middle of the Octagon, they have more chances to keep you away from their hips by just bending forwards or sprawling. But when they are pressed against the cage, they can do none of that.

Also, judo and sambo trips are easier against the cage, Ronda Rousey used to do that a lot in her fights.

Jon Jones Vs.Daniel Cormier 1 is an excellent fight to watch and analyze if you want to see two masters using dirty boxing from the clinch.

Former UFC heavyweight and light heavyweight champion Randy Couture was very famous for his dirty boxing from the clinch. Here are some techniques that you can borrow from him and use in your own fights: 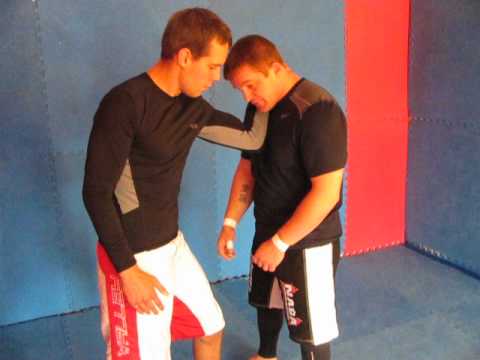 This is the main technique used for dirty boxing inside the clinch, it consists of grabbing your opponent behind the neck with one hand and striking them with short hooks and uppercuts with the other hand:

One of the most used dirty boxing techniques is the single underhook, this technique consists of putting your arm under your opponent’s arm and wrapping it around their shoulder and striking with your free hand.

Underhook as a counter

An underhook can also be used as a counter to the single collar tie. If your opponent tries to use collar ties against you, slide your arm under their armpit and establish an underhook and you will have a dominant position over them.

The clinch game is not a steady game, you have to pummel and adjust your arms according to what your opponent is doing.

Another variation of the regular underhook is the high underhook where you go deep with your arm under your opponent’s armpit and lift it high and you put your hand across your opponent’s face and jaw.
This technique is more suitable if you have long arms and big hands.

Knees in the clinch

One of the best techniques to use in a clinch is to throw knees to the midsection especially when you are grabbing your opponent with a single collar tie.
The purpose of knee strikes is to break the opponent’s posture and make them bend forward. This will expose their chin and set it up for uppercuts.

Breaking from the clinch and reentering

A great strategy is to disengage from the clinch suddenly and unleashing a barrage of punches (3 to 5 punches) then reentering the clinch.

This strategy will put you one step ahead of your opponent and will allow you to catch them off guard.

Always surprise your opponent! when you are in a clinching position, all your opponent is thinking about is how to counter your clinching techniques, this is your opportunity to turn the tables on your opponent and switch the game completely by disengaging from the clinch and launching a flurry of punches then getting back to the clinch before your opponent regains control and launches attacks of their own.

Off balancing with the ear grab

When you are in a collar tie position, don’t stand still and deliver punches. Keep your opponent off balance all the time.

Wrestlers are famous for using the snapdown in wrestling matches. This technique consists of dropping your opponent down from a single collar tie.

Matt Lindland used to use this technique a lot in his fights.

This technique consists of throwing a knee to your opponent’s thigh as if you are trying to strike it, the knee bump causes their leg to move back which enforces the opponent to bend over, this is where you seize the opportunity and put your opponent into a headlock.

Once you have your opponent in a headlock position, you can strike them with knees to the face or choke them with a standing guillotine.

Jon Jones is the king of spinning elbows from the clinch. Jones’ spinning elbows are well known for slowing down his opponents and even being the main winning factor of many of his title defenses.

Shoulder bumps/Shoulder strikes from the clinch

Shoulder strikes are used in many positions from the clinch, it can be used in a two-on-one clinch position, over-under, inside bicep tie, etc.

Shoulder strikes are more effective when they are used against the cage, but they also work very well in the center of the ring or the Octagon.

Sometimes shoulder bumps are not used to inflict damage but to adjust the opponent’s head towards strikes.

How to set up your opponent’s head for strikes using shoulder bumps:

How to trip your opponent with shoulder bumps setups:

Jon Jones is well-known for using shoulder bumps to set up his opponents for a trip. He used the same techniques in both of his title defenses against Rashad Evans in UFC 145 and against Anthony Smith in UFC 235.

The clinch game is a complete art that stands on its own. Some legendary fighters such as Randy Couture have made it their primary fighting style and used it to conquer their rivals and win titles. Obviously you will need to work for endless hours if you want to master it, but as they say, repetition is the mother of mastery.