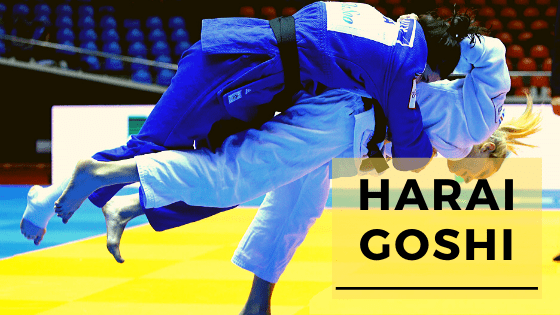 How to do Harai goshi (step-by-step guide)

1. Start by setting up your opponent

Setups are the backbone of any judo throw, you shouldn’t be telegraphing your throws, especially with veteran judokas.
Deception is your ally! Use it to your advantage. Feinting and faking throws to set up your opponent for the real upcoming throw is very important.

In this example, the white gi  competitor fakes an Uchi mata and rapidly switches to a Harai goshi.

Here are some throws you can fake to get to Harai goshi:

There is a full chapter below dedicated to all the possible combinations you can do with Harai goshi. Keep reading.

2. Get a dominant grip

A dominant grip is essential to a successful throw, be patient and don’t attempt a Harai goshi unless you are sure that you have a dominant grip.

Many grips can be used for Harai goshi.

You can use this one:

Another grip you can use for Harai goshi:

Throwing your opponent completely off-balance starts by shaking them and putting them slightly off-balance, it goes step by step. You can’t come out of nowhere and attempt a sweep and expect to see your opponent on their back. This will never happen, especially in high-level judo.

Your goal is to:

If you do all these steps correctly, your opponent will be slightly off-balance, or at least not in a comfortable position to do anything to you.
These are the principles of Kuzushi, drill them on a regular basis, they are useful for all judo throws, not only Harai goshi.

Now is the time to step in your opponent’s grappling range.
In this example, we will assume that you want to throw your opponent to their right side, therefore all the instructions will be accordingly.

Your back should be glued to your opponent’s belly, no space should be left between you and your opponent.
I see many students making the mistake of trying to execute the throw too soon and too far away from the opponent. Don’t do that!

Bend your knees slightly and lower the level of your hips. 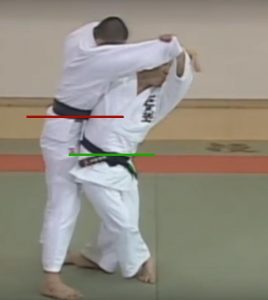 Judo is a game of gravity and the hips are the center of the body’s gravity. Whoever controls that center wins, and you control the center by going under it with your own center of gravity.
This is a very valuable rule, it goes for all judo throws, not only Harai goshi.

7. Hit with the buttocks

50% of the throw is done only by the hips, the buttocks to be precise.
With your buttocks, you should hit your opponent to the groin area or the upper-thigh area. This will help load your opponent on your back easily.

Now you have done most of the work, the sweep is just a finishing touch, it’s not the pillar of the throw. If you have followed all the setup steps to the letter, you should be able to throw your opponent just by rolling them over your back without even having to do the leg sweep.

But obviously, we look for the perfect throw, a throw that your opponent has no chance to escape, even at the highest levels of competition.

How to do the leg sweep:

Kick with your leg backward. Your calf must make contact with your opponent’s upper shin, knee, or the area above the knee. Don’t go higher than that.

While executing the sweep, twist your opponent’s upper body to shift all their weight forward.

Many judo students make the mistake of releasing the opponent once they feel that the throw was a success. This is a big mistake, always keep control of your opponent, even after the throw.

Keep a strong hold on the arm, don’t release the sleeve grip, you will need it to capitalize on the throw.

Setups and combinations of Harai goshi with other judo throws

Harai goshi for MMA and no gi grappling