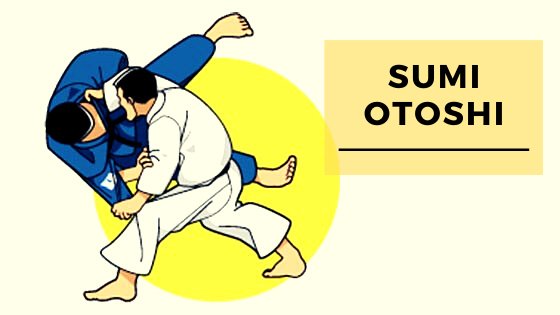 Before getting into our step-by-step guide, it is worth mentioning that many judo students confuse Sumi otoshi with Uki otoshi.

The two techniques are very similar but the main difference between them is the direction of each throw.

If you want to learn more about Uki otoshi, there is a full step-by-step guide we have dedicated to it, take a look here.

Now that we have cleared this confusion, let’s get to our detailed guide.

How to do Sumi otoshi (step-by-step guide)

1. Combine it with Uki otoshi

If you master both throws, your opponent will always be in danger regardless of the direction they go.

If you feel your opponent’s momentum going forward use Uki otoshi, and if they shift their momentum backward use Sumi otoshi. Either way, keep your opponent always in trouble.

Sumi otoshi is a throw that relies extremely on momentum and footwork.

You can’t attempt a Sumi otoshi on a stationary opponent and try to muscle your way to the throw.

You must be slick and tricky, use footwork to your advantage. Dance with your opponent left and right, forward and backward, and in every direction.

Obviously you will need your opponent to go forward for Sumi otoshi, but don’t make the mistake of just dragging them.

They will suspect that you are plotting for a forward throw and they won’t give you what you want.

So use footwork in all directions and hypnotize your opponent, once you see an opening, go for it without hesitation.

Sumi otoshi can be done with several grips -as we will see in the variation section below-, but the most used grip is the standard grip.

Kuzushi is a fundamental principle in judo, it is the base of all throws.

Kuzushi means putting your opponent slightly out of balance before attempting to throw them. It is a setup that you have to use as a preliminary step for all throws.

How to do Kuzushi for Sumi otoshi

Take a step with your left foot as if you want to do Osoto gari.

Many judo masters consider Sumi otoshi as an Osoto gari without using the leg, they both have the same upper body mechanics.

This is why Sumi otoshi can make a great base for learning Osoto gari because it teaches the principle of off-balancing the opponent by using the hands only.

This is the step where many judo students fail in Sumi otoshi.

The keyword for this step is: twist the opponent’s upper body.

You have to move your hands in a motion that resembles steering a wheel.

All the basics of the throw remain the same, but sometimes, slight adjustments are made depending on the nature of the grip.

This is how to do it:

A. With your right hand, grip the left sleeve of your opponent from under the elbow.

B. With your left hand, grip the right sleeve of your opponent. It doesn’t have to be from under the elbow as on the other hand, just grip wherever you feel comfortable.

C.  Remember the steering wheel motion in step 6? Use the same motion, instead of pushing diagonally from the lapel, now push from under the elbow.

In this variation, use both hands to grip your opponent from the back of the gi. The steering wheel motion stays the same.

In judo, you have to be opportunistic, don’t wait for the perfect grip to execute a throw. Use whatever grip that looks available, and apply the same mechanisms.

Remember, even if the grips change, the principles of the throw always remain the same.