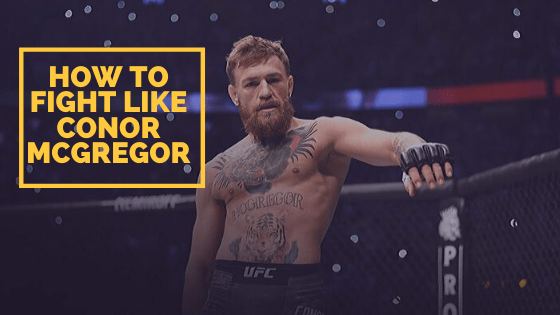 The “Notorious” Conor McGregor is undeniably one of the best fighters on the planet. His unorthodox, relaxed style has fascinated fans for years and has proven successful in some of the biggest matchups the UFC has ever seen.

Like any other fighter, McGregor has his personal techniques and skillset. From bolo punches to hook kicks to balance and posture, McGregor brings a fighting toolkit like no other to the Octagon and systematically destroys almost all his competition.

Here’s a list of the particular techniques and skills that help set Conor McGregor apart. You should try to learn them if you want to fight like the “Notorious”: 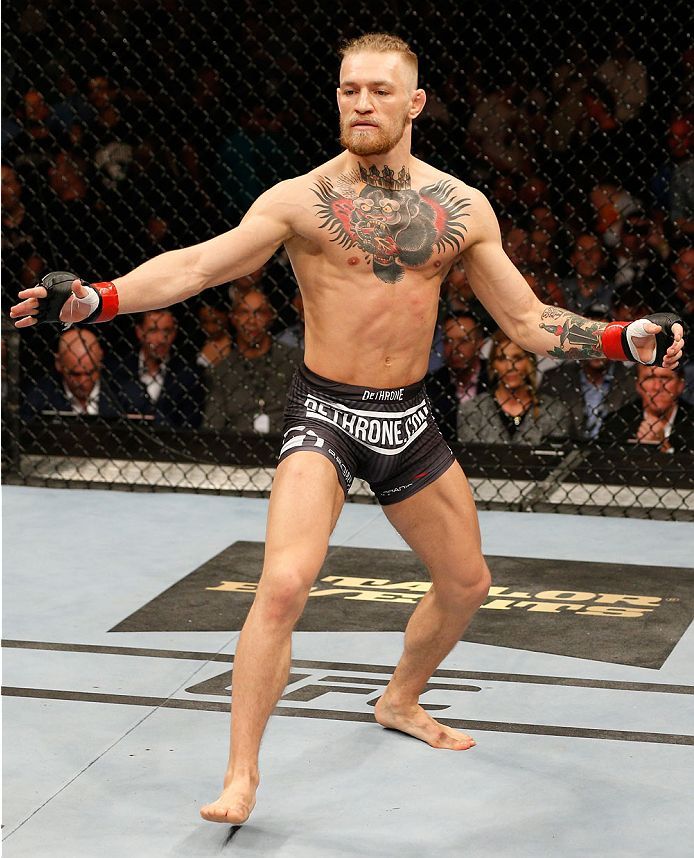 Compared to many other fighters, McGregor often remains vertical and balanced while fighting. You see a lot of other fighters pitch a lot of weight into their front leg, often to establish a jab. This means that, in order to stabilize that position, their torso has to exert a lot of energy.

McGregor, on the other hand, remains balanced and upright. This is much more efficient and means he conserves a lot of energy. Likewise, he doesn’t tend to bob and weave too much. Again, this helps conserve energy, though it does put you in danger of your opponent’s strikes.

So, if you want to fight like Conor McGregor, one of the first things you can do is stand up straight, try to remain balanced and vertical while you fight, and think about conserving energy. Try to minimize unnecessary movement. Over the course of a few rounds, you’ll really start to see a difference.

McGregor doesn’t keep his hands up like traditional boxers. This is because he doesn’t use his hands to maintain distance. Instead of pawing someone with jabs constantly to keep distance, he uses kicks like fast roundhouses.

Using long attacks to keep his opponent outside of punching range means he doesn’t have to keep his hands up. Plus, when he needs to block a strike, all he has to do is cover up as he reacts to a strike by raising a hand to whichever side the strike is being thrown.

Since his opponent is being kept at a further distance by the kicks, he has more time to see the strike coming, meaning he has plenty of time to cover up even though he keeps his hands relatively low. If you want to fight like McGregor, try using your feet, instead of your hands, to maintain distance.

McGregor tends to fire off a lot of kicks at the start of fights. You’ll see him throw plenty of unorthodox kicks, particularly in the early rounds. This tends to scare his opponents by keeping them guessing, as well as making them keep their distance and backing up.

This allows McGregor to be the aggressor. By making his opponents back into the cage, McGregor gives himself plenty of open space to work with. Plus, the middle of the ring is to his back, so when a strike is thrown by his opponent, he has open space to back into, instead of a cage.

To fight like Conor McGregor, try to maintain that pressure by moving forward. By throwing long attacks and plenty of kicks, you should be able to keep your opponent backing up into the cage while giving you plenty of open space behind you.

Conor Mcgregor has used this kick successfully against Eddie Alvarez, Max Holloway, and Dennis Siver. To perform this kick like McGregor, stand in a wide stance, almost sideways to your opponent.

Shuffle and replace your lead foot with your rear foot and your lead foot becomes the striking foot. While this is a great kick to maintain distance, it can also pack decent power. Try to aim for your opponents lead leg or their gut, just under the ribcage.

To execute a spinning back kick, step forward with your lead leg, pivot, and turn to launch your rear leg into your opponent’s body. Spinning back kicks are great for maintaining distance as well as effective, punishing body shots.

To execute a spinning heel kick, the footwork is the same as a spinning side kick. First, step forward with your lead leg, pivot, turn and launch your rear heel at your opponent’s head, instead of to the body. To fight like the Notorious, you definitely want to hone your spinning heel kicks.

We saw McGregor execute the rear leg scissor kick, or switch kick, beautifully against Dennis Siver. It’s a powerful attack and one you’ll want in your arsenal if you’re going to fight like Conor McGregor.

To execute a scissor kick from an orthodox stance, step forward and push off your rear foot. Lift your lead knee up for a fake and scissor your legs and throw a left high kick at your opponent’s head. It’s a brutal attack when thrown effectively and once you start using them, you should see a huge improvement in your kicking game.

This punch was originated in the sugar-cane fields of the Philippines, as workers used a “bolo” knife to sweep down and cut the sugar cane. In boxing and MMA, it turned into a looping uppercut that Conor McGregor uses with huge success.

Not only does the bolo punch deceive the opponent, but it lifts their head up, allowing McGregor to follow up with two or three heavy punches. McGregor has used a combination starting with a bolo punch to finish numerous fights.

To throw a bolo punch, first, set it up with a jab. Loop the striking hand down and back in a circular motion. Keep the momentum going and rip the punch directly at your opponent. Often, their face will be out of reach, so aim for the bottom of the sternum.

Adding a bolo punch to your arsenal is a great way to vary your attacks, improve your combinations, and fight like Conor McGregor.

McGregor moves fast. He maintains distance using long attacks like kicks as we’ve seen. This allows him to stay just outside people’s range and he moves in very quickly. Covering distance is one of the key ways McGregor is able to keep the upper hand in his fights and keep his opponent backing up.

If you want to fight like McGregor, use leg and hand feints or be ready to weather a storm. Be ready to cut off the ring instead of moving straight forward. This means using your footwork and throwing hooks if your opponent tries to circle out.

You don’t necessarily need to jump in and explode on your opponent to cover the distance. Try to do it patiently, throwing feints, kicks, and jabs, to distract. Keep your opponent backing up and you’ll be on your way to fighting like the “Notorious” Conor McGregor.

One of the most distinctive techniques of Conor McGregor is his willingness to throw strikes from literally anywhere. His relaxed style often comes across as messy and unstructured, but his ability to surprise his opponents often means he comes out on top.

Be willing to throw attacks from unexpected angles and when your opponent isn’t expecting it. Often, McGregor will throw a kick almost expecting it not to land. But this causes his opponents to be distracted and to always be guessing.

If you can keep your opponent guessing, you’re much more likely to get them on the back foot. If you want to fight like McGregor, try throwing punches and kicks from unusual angles. You can even try throwing your shoulders in a clinch like we saw him pull against Cowboy.

If you want to fight like Conor McGregor, then hopefully, this list has helped you get an idea of what techniques to master. From kicks to covering the distance to unorthodox attacks and posture, you should have everything you need to fight like the “Notorious” Conor McGregor.