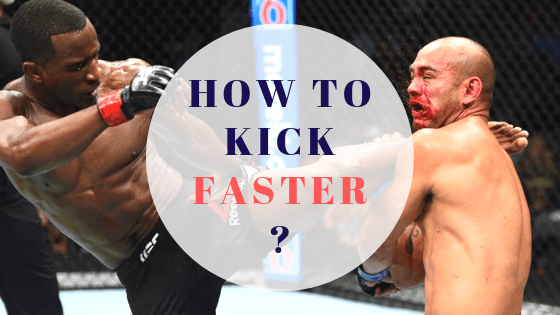 Kicks are a thing of beauty except they’re devastating. The sound of shattered ribs and a broken jaw as your opponent tries to hold it on together after the crunching kick that you just landed  is simply a work of art.

Lot of your kicking abilities depends upon the timing, control, power and speed. While timing, control and power are usually talked about in detail, speed doesn’t get much-needed recognition.

For a kick to be devastating, it needs to be lightning quick along with being powerful and measured. If it lacks speed, your opponent will easily predict the movements and will manage to outmanoeuvre you every single time.

Thus, this blog is about helping you to learn how to kick faster with the help of several drills and techniques which will make your kick venomous. By the end of this read, you will have the basic knowledge essential to knock someone out before they even get close to you.

First, let’s start with the different types of kicks. Usually, kicks can be broadly classified into two types: Swinging and Thrusting.

Swinging kicks involves speed which comes from the rotation of the body. In this type, the core of your body plays a vital role along with hip rotation.

Thrusting kicks largely depends upon your leg strength and core stability. In this type of kick, the emphasis is on the hips and waist and not on the rotation.

As you may have noticed, hips, waist and core are vital in both these forms of kicks. Not just that, to execute any type of effective kick, these three areas needs to function at its best.

So having learnt about the kick types, we can understand that hips, waist and core are crucial in delivering a venomous kick. The question is how do you make it quick? How do you improve your kicking speed?

There are numerous drills which can help improve your kicking speed; the primary one is stretching and flexibility. There are three muscle groups that we need to work to get faster kicks. The first one is the hamstring group followed by adductor (inside portion of your leg) and your upper legs.

A perfect technique will help you kick fast. Precision is what matters the most and is the art you need to master if you want to kick at a higher speed. To kick fast, you need to start slow.

By slow, I meant slow motion. Shadow your kicks, while performing your kicks, try slowing them down to check the flow of it along with your body form. This will help you understand kicking abilities better including your kicking speed. Muscle fibers increase endurance and help develop rhythmic pace essential for speed kicks.

Keep building up the speed as you keep jumping. (You can take this one step ahead by jumping forward and converting this stance into a squat, this explosive drill will help build your legs and improve the overall speed).

Easy visually, difficult to emulate. Long jumps are quite effective and help you generate speed quickly due to your thrusting hips. To do this, swing your arms and jump as forward as you can. Do this at least 10 times daily to witness effective results over some time.

Stand up on stairs, preferably a couple or triple. Step off the stairs and upon touching the ground, jump up with both feet. In this drill, the emphasis should be on how quickly you can jump the moment your foot touches the ground. Once, you master this exercise; your front kick will improve drastically.

Lunges are great for your core strength and leg muscles. Jump lunges, however, are a step ahead. They will not just strengthen your core but will help you release the kick faster.

It’s quite simple, just stand in a front stance, jump in the air and keep switching the legs as you sink into a lunge. A set of 10-20jump lunges can prove to be helpful.

For a speed kick exercise, you need to have a partner. Herein, you hit the punching bag held by your partner and ask him/her to give a call randomly. This will sharpen your alertness and will increase your instincts to kick at the right time. Not only will it improve the speed but also the precision of your kick.

Lateral leg raise is a great exercise to strengthen and improve the overall speed of your kicks. It requires you to lie down flat on the ground and raise both your legs together towards the ceiling. Take it as far as you can. Not only will it build the core but also enhance the overall kicking speed.

There are many exercises which you can do with the help of a wall. These include kick holds, figure 8, and kick stretch. It requires you to touch a wall with your left hand or vice-versa and practice the hold.

All these drills require you to hold your kicks mid-air as it improves the overall speed and precision of your kicks. Figure 8 involves drawing an 8 in the air after holding your kick mid-air and kick stretch as the name suggests refers to stretching as far as possible.

For instance, instead of going through a 45-degree full motion, you can choose to lift your leg followed by the quick kick. Herein, you reducing the timeframe by taking a short cut.

You might practice all that you want but the true abilities can only be tested during a sparring session. You’ll improve your overall movement, reflexes and kicking speed when you have a sparring partner. If you’re not much into sparring then you can try kicking a bag and keep a track of the progress.

Practice disguised kicks. Often utilized by professional martial artists, disguised kicks are quite exciting. Herein, you try to distract the opponent with your punches while gearing up for a knock-down kick, out of nowhere. The key point in such kick is to not let your body posture give away your next move. Disguised kicks are rapid and would help you take down your opponent in a flash if delivered correctly.

How does stretching help with kicking speed?

Stretching helps you train the muscles to relax in a certain position. As long as you hold the stretch, the muscles learn to loosen when you go back to the given position. You should put a tremendous amount of energy and efforts in stretching.

Remember, stretching is not time-based, if you keep a count while stretching then you’re probably doing it wrong. Stretching enhances flexibility and helps your overall movement.

It gets rid of rigidness and adds fluidity to your legs. Not only does it help you gain control over your kicks, but it also helps you to manifest the kick at a correct timing and at a higher speed.

Which martial art has the fastest kicks?

It’s all personal preference. It’s quite hard to state which one’s the fastest as there is many and each one equally good. It all depends upon the individual. But if I were to pick one, I would say Taekwondo.

I’ve seen 6-7 kicks in less than 1 second from Taekwondo practitioners, but that doesn’t state that Muay Thai or other martial art forms cannot achieve this. As is said, it’s all personal preference, and it comes down to an individual’s skill.

However, I can surely point out one thing, though Karate is great at offence, it’s not as fast as Taekwondo when it comes to kicks.
Having learnt about the importance of stretching, let us check out drills which can improve your kicking speed. Note that, kicking speed has got a lot to do with your core strength. Thus you’ll find exercises which emphasize on your core and control along with the striking exercises.

Does weightlifting decrease speed in kicks?

Unless you’re bulking up and gearing to become huge, it’s not going to affect the speed of your kicks. Many coaches around the world recommend adding weight training to the drill to strengthen the core and your legs which can result in faster kicks.

However, there’s a proper proportion which needs to be maintained while weightlifting. You must ensure not to go overboard and exert unnecessary pressure on your legs. Moreover, you must play safe with explosive drills because they can get you injured sooner than you expect and might also result in a threatening blow.

Remember, to kick fast; you need to start slow. Keep practicing with patience and do not get overwhelmed with results. You have a better kicker standing right next to you. Also, do not forget to warm up before you approach the explosive drills. Negligence will only lead to harm.