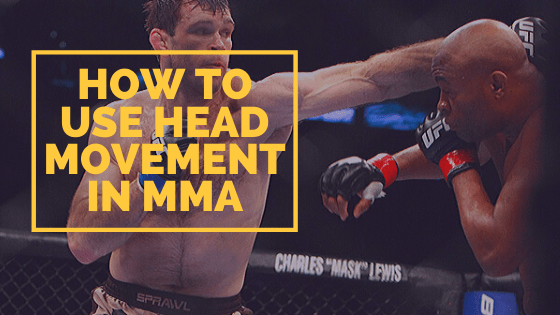 Other people say too much head movement in MMA opens you up to takedowns, kicks, and knee attacks. Like anything, though, the truth lies somewhere in the middle. While you don’t want to over-rely on your head movement to keep you out of trouble, it’s still a skill you should practice so you can employ it as and when it’s needed.

Before we get stuck into the nitty-gritty of head movement, though, let’s take a second to talk about positioning. Regardless of what you’re doing with your head, you should always be trying tomaintain balance and posture.

This means maintaining good posture and keeping your opponent in your line of sight. It doesn’t matter how much you move your head if you can’t see the attacks or if you’re stumbling off balance. Perhaps it’s a little counter-intuitive, but head movement originates in the hips.

If you’re moving your head by using your neck or back, you’ll often end up looking at the floor, which leaves you wide open to attacks. Instead, try to move your hips, trunk, and then head. This will allow you to keep your eyes on your opponent.

Keeping your gaze and stance intact allows you to establish better attacking positions, which is key to winning your MMA fights. So, now you have a better understanding of what head movement is, and why it’s important, let’s take a look at the specific head movements to master.

Here’s a list of the particular head movements you should try to master to reap the benefits in your MMA fights. Remember, slow is smooth. Smooth is fast:

Slips are where a fighter moves their head side to side to avoid punches. The side-to-side movements of the head are caused by a fighter shifting weight from foot to foot while rotating the torso and slightly bending at the hips.

In general, slips are used to avoid a straight punch like jabs and crosses. Slips can be executed to the inside and the outside. To perform a slip correctly, it’s important that you don’t lean.

Leaning forward will often end with you intercepting your opponent’s fist with your face. If you lean back, on the other hand, you’ll put yourself out of reach of a counter-punch.

Remember, whatever head movement you’re executing, you’re trying to set up a counter-attack. This is why slips aren’t purely “running away” from a punch. Rather, you’re slipping into a better position to throw a counter.

Floyd “Money” Mayweather made pulling famous. Also called Riding the Wave, a pull is where a fighter moves their head back quickly but remains in the stance. A pull can often look like simply leaning back, but it’s actually a little more subtle than that.

The reason for the subtle back step is to maintain your ability to counter. A successful pull creates enough distance to avoid your opponent’s attack, while maintaining your stance and keeping close enough to throw a successful counter.

A pull can often be initiated by leaning in slightly to bait an attack from your opponent. This will give your opponent a false sense of distance. After luring an attack, you can use your opponent’s momentum against them.

Ducks, also called dips and bobs, is a pretty simple head movement where you duck underneath your opponent’s attack. A duck involves a level change as you move your head vertically down.

To perform a duck from your boxing stance, bend both of your knees. A key element to a successful duck is to keep your back straight. If you bend your neck, you’ll lose sight of your opponent, opening up plenty of space for successful attacks.

If you’re having trouble executing a duck, try to think of it as a “dropping” motion instead of a “bending” motion. You don’t want to drop to the floor, though. Rather, try to drop your head under an oncoming punch, so that it will simply graze the top of your head.

Think about doing a squat. Bend your knees, stick your butt out, and keep your back and neck straight. Once the punch misses, all you have to do is explode upwards and throw a counter of your own. Always remember, a successful head movement sets up an attack of your own instead of simply avoiding one of your opponent’s.

Weaves are pretty similar to slips in that they involve the linear movement of the upper body. Linear movement means you’re moving your head side to side. Weaves, as opposed to slips, include a change in level.

Weaving, often called bobbing and weaving is where you move your head beneath and laterally of an oncoming attack. As your opponent’s punch arrives, bend your legs quickly and shift your body slightly to the left or the right.

As most opponents will be fighting in the orthodox stance, they’ll most commonly throw a left jab first. This means that, generally, you’ll begin weaving to the left. This isn’t written in stone, however, so always keep an eye on your opponent’s hands.

Try not to bend at the waist. This will take your eyes off your opponent, as well as move your head closer to your opponent and within range of more strikes. Similarly, try not to bend to low. You want to avoid the punch by as little distance as possible to properly set up your counter.

Being able to slip or roll to evade an attack is a great defensive skill to work on to improve your fighting. However, you can up your game even further by being able to throw an attack while performing a defensive manoeuvrer.

Try to throw jabs while slipping or hook while rolling. These evasive techniques are great for creating angles, creating openings, and increasing the power of your shots. You’ll see a huge improvement in your game if you can combine head movement with attacks.

Head movement is one of the trickiest aspects of fighting. Everyone has an opinion on it and everyone thinks you should do it differently. Remember, though, if it’s effective, you should probably add it to your arsenal.

Here are a couple of final tips you should think about in order to improve your head movement game.

Make them miss by inches – Try to make your opponent miss by as little as possible. When you’re fist learning head movement, the inclination is to make huge movements. Ideally, though, you want them to pretty much graze you as they miss. This will help you conserve energy, but more importantly, it will help you set up a counter. If you slip or weave too much, you might miss an opportunity to land a fight-winning counter.

Practice, practice, practice – There are thousands of ways to practice head movement. You can practice head movements in sparring, doing pad work, using foam noodles, a slip bag, and shadowboxing. At first, you might feel weird as you get used to moving your head is unusual ways, but over time, you’ll definitely see an improvement in your game. It doesn’t matter how you look, it’s about improving percentages.

7. Dangers of Head Movements in MMA

As we mentioned at the start of the article, there is plenty of debate when it comes to using head movement in MMA fights. We’ve gone over some of the best head movement techniques you can use while fighting, but why might you not want to move your head too much in an MMA fight.

We often see boxers like Ali and Mayweather showing master classes of head movement in their fights and some people might be left wondering why more MMA fighters don’t employ evasive techniques like the great boxers.

Well, the answer is pretty simple. In boxing, all you have to worry about is your opponent’s fists. In MMA, on the other hand, your opponent is well within their right to throw a knee right into your face after you’ve ducked under a cross.

The amount of head movement you use in an MMA fight is up to you. There’s no harm in practicing, but it’s always good to be aware of the risks involved with any fighting technique. So, before you start bobbing and weaving in an MMA fight, be sure you’re aware of what other attacks might be coming your way.

So, now you’ve had a look at the basic head movements you can use in your MMA fights. From bobbing and weaving to ducking and slipping, you should now have a pretty good idea of how to add head movements to your game.
Remember, whatever you’re doing with your head, you’re always trying to set up an attack. Nail your head movement and you’ll start nailing your opponents.