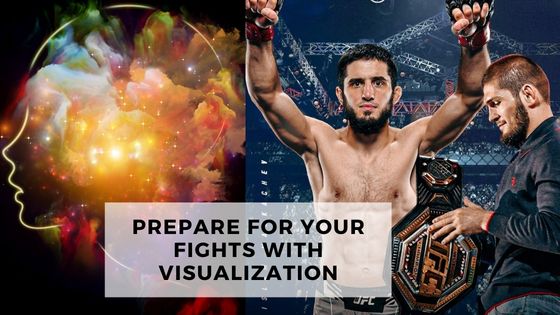 We all have in our gyms that fighter who trains very hard and beats everybody in sparring, but when it comes to the fight they are like a deer in headlights, they freeze, can’t perform, and then lose.

This is a well-known phenomenon that I see my fighters go through.

In this article, I will explain to you the secret that the best fighters in the world use to shine under the spotlights and embrace the chaos of the fight.

This secret is called visualization

Fighters always talk about their training camp, the technical things they have focused on during training camps, the conditioning, etc.

But there is one thing the majority of fighters don’t talk about, which is the visualization work they do during training camp.

Fighters don’t talk about this for this reason:

It is like therapy, many fighters go to therapy before or after fights, especially after losses, but they don’t talk about it.

The only fighter who spoke openly about visualization was Conor McGregor during his prime days.

How to do visualization for an upcoming fight?

1. Sit down or lay down comfortably in a place where you can’t be interrupted.

3. Now, start visualizing the parts that make you anxious before, during, or after the fight.

4. Usually, the part that makes people the most anxious is the waiting before the fight where you have to warm up in the locker room, do the walkout, stare down your opponent, touch gloves, and then start the fight.

This part in general is what gives fighters an adrenaline rush and makes them freeze and feel sloppy and vulnerable.

There are two ways to overcome this adrenaline rush:

a. Either by doing it many times, which means you have to have lots of fights and a lot of experience, and this is something only old fighters could have.

b. Or by visualizing these moments again and again until your mind gets used to them, and they become familiar.

As a young upcoming fighter, you have no choice but to do visualization until your mind gets used to the experience.

The visualization is a cheat code you use to catch up with fighters who have already been there more than you did.