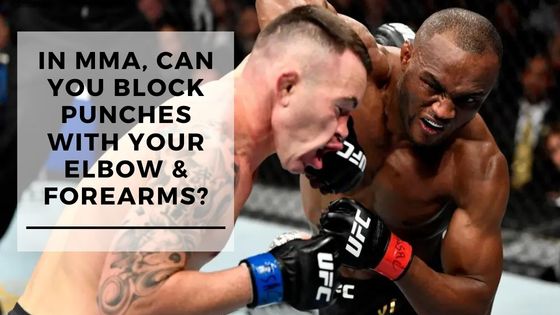 Since MMA compiles a lot of different disciplines, it offers a variety of techniques that you could apply.

Some of them are quite popular and recognizable, but others are not that used or seen, such as elbow and forearm blocks, which are very common in Asian martial arts like karate, and even in boxing.

Can you block punches with your elbow and forearms in MMA?

In terms of rules, it’s completely legal to use elbows and forearms to block punches.

Both are pretty strong parts of the body, so using them would make sense to protect yourself and also hurt your opponent while doing it.

But as we know, sometimes theory and reality are miles away from each other, so that leads us to our next question:

Is it effective to block punches using your elbows and forearms in MMA?

Starting with elbow blocks, it is more natural in boxing, where it’s easy to find legendary fighters like Floyd Mayweather and Saul “Canelo” Alvarez doing it.

First, understand how it works in boxing

In MMA, we have seen fighters like Rory MacDonald blocking with their elbows pointing upwards, to bump their opponent’s straights and as a way to maintain some distance when they throw double jabs.

It is not a common technique since it is rather hard to achieve, and not as effective as other blocking techniques, but it’s an interesting resource that can work well in cases like we last mentioned.

Elbow blocking can also work for low punches. While having your guard up, a straight punch to the stomach will pass by your elbow level, and at that moment you can parry it with the side of your elbow, or the lower part of your forearm.

Speaking of that, moving to forearms:

Forearm blocks are very usual in Asian martial arts like Karate and Wu Shu, where they’re used to deflect strikes upwards, downwards, and to the sides.

In the same way, they are quite usual in MMA

As we said before, one of the most common examples is to block or parry low punches. Coming from that same guard position you can block uppercuts and hooks by just moving them inside or outside.

Compared to the elbows, using your forearms feels more natural when it comes to blocking since you use them as a shield when in a guard position.

In any case, both can be useful techniques. Use them cleverly, and they will definitely improve your defense and your overall fighting abilities.