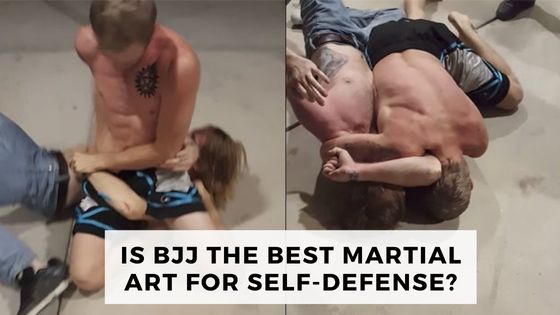 The short answer is no! Brazilian Jiu Jitsu is definitely not the best martial art for self-defense.

Everybody knows that Brazilian Jiu Jitsu is effective in self-defense situations, and we have all seen videos of BJJ fighters strangling thieves on the street. But is it always the case?

Obviously not! In many countries like the UK, people are known for carrying knives. Trying to grapple with somebody who is carrying a knife is a death sentence!

Trying to take down someone who has a knife and grapple with them is a good way to get stabbed, even if the other person doesn’t have any notions in submission grappling and BJJ.

BJJ Vs. Getting kicked

Also, falling with somebody on the ground is an easy way to get kicked in the head by their friends.

Let’s say you want for example to take someone’s back and execute a choke. Taking someone’s back means that you are generally at the bottom while they are on top with their back against your chest.

As advantageous as this position is to strangle your opponent, it is also a handicapping position, because you don’t have much freedom to move or escape in case someone’s friend comes and wants to stomp your head against the concrete.

Let’s say you are mounting your opponent while ground-and-pounding them. Yes, you might knock them out or transition to an armbar, but also, a friend of theirs might come from behind and kick you to the head and knock you out.

There are many videos of situations like that on the internet.

Another situation where Brazilian jiu jitsu becomes useless on the streets is when there are multiple attackers.

You only have two hands to grapple, and all grappling is meant to be used only against one person, if there is more than one attacker then all your years of practice in BJJ go out of the window.

What is the solution then? What’s the best martial art for self-defense?

The best martial art for self-defense can be any striking martial art where you can use your punches and kicks to hit your opponent while standing without having to go to the ground with them.

Hit from a distance, neutralize, and run!

A combat sport like boxing or kickboxing can also be very effective against multiple attackers. Sometimes all it takes to neutralize an attacker is a punch or a kick, then you turn to the next one. There are lots of videos on the internet where one person knocks out multiple attackers one after another.