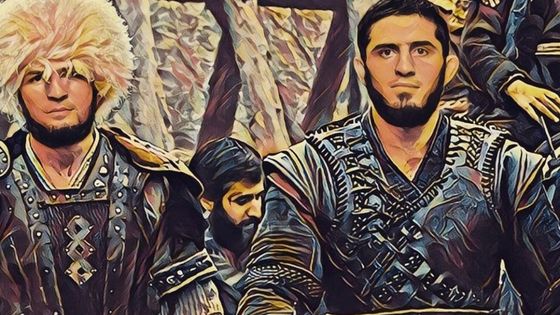 Many call Islam Makhachev “Khabib 2.0” which means he is a better version of Khabib Nurmagomedov.

First, let’s all agree that Islam Makhachev and Khabib Nurmagomedov will never fight each other, simply because they are friends, teammates, and a family.

The older brother vs. the young brother

Both fighters trained under Abdulmanap Nurmagomedov (Khabib’s father) from a young age, they are both World sambo champions, and both have received the same amount of attention from Khabib’s father.

Khabib is 3 years older than Islam, which made him the big brother who always did things first.

Years later, Islam Makhachev did the same and won his first World Sambo Championships gold medal in 2016, in Sofia.

They both have exactly the same technique and skill set

After Khabib and Islam moved to the US, they started training at AKA under coach Javier Mendez.

Both fighters have been feeding off each other’s skill set. Now, their wrestling is the same, their attacks are the same, and 20 years of training together has made them similar in skill set.

What Islam Makhachev has that Khabib didn’t have

The only thing that Islam Makhachev has that Khabib didn’t have is the guidance of Khabib himself.

Islam has the advantage of being coached and cornered by Khabib himself, a genius fighter.

Khabib didn’t have that. He obviously had Javier Mendez in his corner, but Islam has an undefeated champion in his corner who knows his capabilities and limitations for over 20 years.

This is exactly what might make Islam better than Khabib, simply the guidance and the cornering.