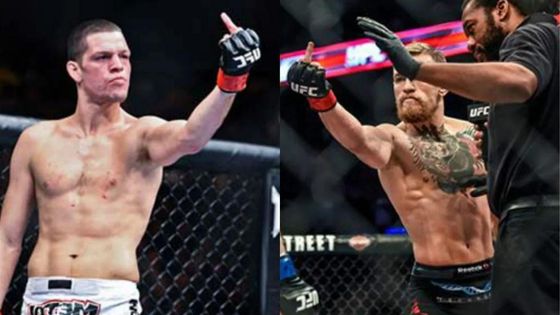 MMA is thrilling because it gives competitors the freedom to trash talk each other before fights and then back it up when it counts.

To the promoters, the more vicious the trash-talking is, the more hype surrounds the game, which can translate to more exposure and, subsequently, more money.

Unlike in WWE, the back-and-forth banter between MMA fighters is real. The words aren’t given to them to read in front of the camera. They are wholehearted feelings from the fighters.

Importantly, however, is that most of the time, the bad blood is finished by the time the fighters step into and out of the ring or Octagon.

Usually, behind the trash talk, there’s plenty of mutual respect between combatants, and it’s rare to see the pre-fight trash talk continue into the cage.

Is Trash Talking Allowed During An MMA Fight?

According to the unified rules of MMA, using abusive language during a fight is illegal.

During fights, Jason Knight, the Diaz brothers, and others have a history of verbally and physically taunting their rivals.

Since the rule isn’t always followed, fighters have regularly gotten away with trash-talking inside the cage.

However, the only prominent incident of a referee attempting to discipline a fighter for this came at UFC 47 in 2004 when Nick Diaz was warned for doing so by much-maligned referee Steve Mazzagatti.

But still, that was a rare occurrence, and even referee Steve Mazzagatti was given a hounding for pausing the fight because, apparently, it was what the people wanted.

In the world of combat sports, trash-talking sell the pay-per-view, and organizations like the UFC actively support it in the pre-fight show.

But during the game, the fighters are not expected to continue with their trash talk, but instead, show some respect for their opponent.