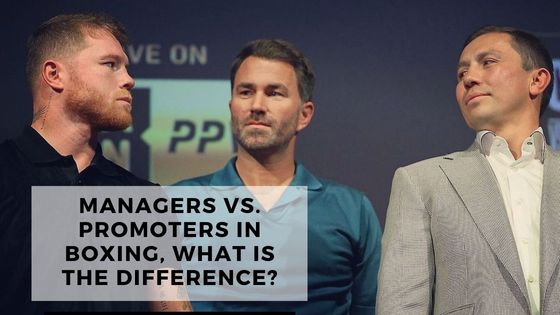 The boxing industry is a multimillionaire business. We are used to seeing boxers on the lists of the richest athletes in the world, but have you ever wondered where does all that money come from?

Just like any other industry, the boxing world goes way beyond the fighters that stand in the ring. There are lots of people backstage working to make things happen, but today we will focus on three of the main characters in this story:

What does a boxing promoter do?

If you are a fan of this sport, or even if you have seen movies about it, you might have heard of the term “promoter”. But, what does a promoter do?

Promoters are individuals with contacts in the boxing world, who put fights together.

They arrange dates, venues, and of course, the fighters, kind of like an event planner, and as their name says, they have to advertise and promote the event.

This promoter tries to make the most money they can out of the fight, they get it through ticket sales, broadcasting rights, and pay-per-view sales.

What does a boxing manager do?

They also know different people from the boxing industry, so they are in charge of getting the best deals for their clients, making sure that they get a fair economic reward and other conditions for a fight.

For this job, they take a percentage of the boxer’s pay, and a good manager can work with numerous fighters at a time.

Is there anything left for boxers?

Yes. As we said before, athletes have an arranged amount of money they will receive for a fight. This will depend on their skills and also on their fame.

In fights between famous boxers and underdogs, the fighter with the biggest name will earn better pay.

Why do boxing promoters and managers make so much more money than MMA promoters and fighters, even though both sports have approximately equal PPV buys and viewers, etc.?

Well, a few factors apply when analyzing this. One of them is that boxing is a much older sport, so its industry is better developed and reaches more countries, areas, and demographics.

Because of this, boxing involves a wider variety of organizations, promoters, networks, and media that can invest more in shows, and also create more competition.

Despite those facts, the gap between boxing and MMA becomes shorter and shorter with time, and we can find fighters like Connor McGregor reaching the economic success of boxing stars.

It’s reasonable to think that with the astronomic growth of organizations like UFC, MMA could become the most popular combat sport, and perhaps reach or surpass the grossing capability of boxing events.