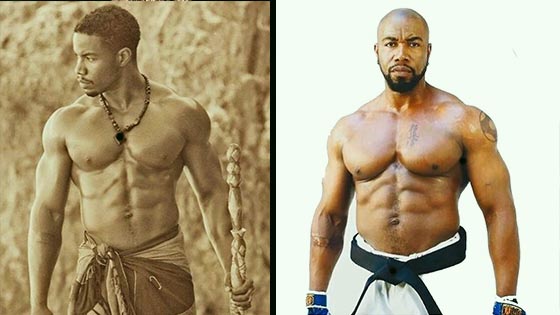 As a young kid from Brooklyn, New York, Michael Jai White had all the odds stacked against him.

He lived a rough childhood and suffered from bullying at school.

Mike was raised by a single mother who was a teacher.

He started training Jujutsu at the age of 7.

He later switched to Shotokan Karate which is a style of Karate that relies extremely on explosiveness, flexible and quick kicks.

Shotokan Karate is the main reason why Michael Jai White has built his fast-twitch muscle fibers at a very young age.

During high school, White moved with his mother to Bridgeport, Connecticut.

By the age of 19, Michael became a veteran in several martial arts.

He became a legitimate competitor in the Karate scene and won several prizes in national competitions.

He also studied acting in the HB Studio.

Michael knew exactly what he wanted from a very young age.

His dream was to become a movie star, so he shaped all his training for that purpose.

At this age, Michael was struggling to make a career in acting.

He started with minor roles in small movies, acting agencies told him that he was too big and too muscular for acting.

He auditioned for many roles but he faced a lot of rejection.

He said in an interview that rejection started to have a toll on his mental health, so he channeled all his bad energy into martial arts.

At this age, Michael Jai White’s acting career didn’t take off yet.

Meanwhile, he was collecting black belts left and right in different martial arts.

He ended up having 7 black belts in 7 different martial arts:

Michael was also a teacher for students with special needs and students who have behavioral problems.

In one of his interviews, Michael expressed his negative stance against Hip Hop lyrics.

His past experience with special needs students taught him that they can’t make the difference between what is real what’s not in hip hop lyrics.

At the age of 28, Michael Jai White’s career finally took off after a long struggle.

He finally made it and got the opportunity to portray the character of heavyweight legendary boxer Mike Tyson in the HBO film ‘Tyson’.

Michael seized the opportunity and showed exceptional talent in his acting.

His acting drew the attention of directors and the film industry, offers started coming from different production companies, and that was the real beginning of Michael Jai White’s career.

He also starred in Spawn, a major superhero film.

Michael Jai White was one of the first African Americans who portrayed a major comic book superhero in a superhero blockbuster.

His acting performance in Spawn earned him a nomination to the Blockbuster Entertainment Award.

Michael started getting featured in movies alongside big boys like Jean-Claude Van Damme in Universal Soldier: The Return.

Jean-Claude Van Damme was not the only star who was amazed by Michael Jai White’s fighting skills, Scott Adkins also expressed the same amazement.

At this age, Michael Jai White was dating his future wife Courtney Chatham.

They got married later in 2005 and together they have a daughter named Morgan.

White also appeared in a music video alongside Busta Rhymes and Mariah Carey.

He later appeared with Nicki Minaj in her music video ‘Your Love’.

By the age of 35, Michael Jai White got featured in major movies such as Undisputed II: Last Man Standing.

He portrayed the character of a former boxer George “Iceman” Chambers, who faced Yuri Boyka, a Russian prisoner portrayed by Scott Adkins.

Scott Adkins said in an interview that Michael Jai White was the best martial artist he worked with.

White has over 20 titles in martial arts competitions including:

After a long struggle in his marriage, Michael Jai White announced his divorce.

After his divorce, Michael decided to take a hiatus from relationships. He channeled all his energy into acting.

In this period, he decided to make his debut as a film director and made the famous MMA movie  Never Back Down 2: The Beatdown.

The couple has already dated 2 decades ago, they stayed together for less than a year and then split up, but they remained friends.

Long story short, Michael confessed in an interview that one day he was feeling sick, he took a pill to sleep, but his body reacted badly to the pill which made his situation worse.

He thought that he was going to die, so he decided to call his loved ones, and Gillian Iliana Waters was amongst the people he called.

During that call, White confessed his love for Waters, and it was the beginning of their new relationship.

After one year of his marriage to Gillian Iliana Waters, Michael Jai White wrote a long letter and posted it on Facebook entitled “Apologies to My Ex’s”.

In this letter, White expressed his gratitude to his wife Gillian Iliana Waters and gave her the credits for her positive influence over him.

He said that she was the reason why he became the best version of himself.