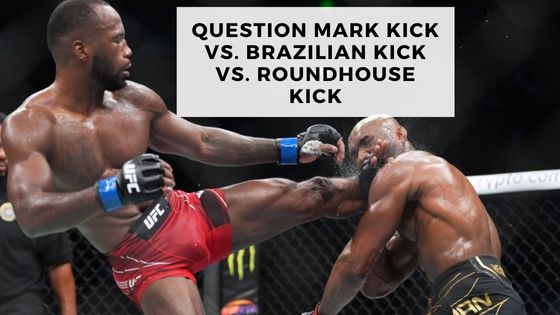 What is the question mark kick?

Receives that name from the figure followed by the kicking foot when performed. It’s done by lifting the knee, and rotating the support foot to then unleash the lifted leg and cut horizontally across the opponent’s body

This means that the kicking foot draws a straight line up, and then a curved line, so the resulting shape resembles a question mark (?)

Pros of the question mark kick

The first part of this technique, which consists of lifting your knee, can trick your opponent into thinking that you are about to throw a front kick. If this works, they will lower their guard to block a front kick, leaving the upper body open for a clean shot

Cons of the question mark kick

It requires more flexibility and balance than other kicks, so it’s better to practice it a lot before trying it in a real fight situation, since performing it incorrectly could mess up the fighter’s stance, giving a critical advantage to the opponent.

What is the Brazilian kick?

Works with a similar motion as the question mark kick, but in this case, you should lift your foot higher, and rotate your anchor foot and shoulders even more, to be able to strike the kick slicing downwards, rather than horizontally.

Pros of the Brazilian kick

It has the same benefits as the previous kick, but when performed correctly, it has better chances of striking the jaw because of the height reached by the foot and the downwards motion of the kick

Cons of the Brazilian kick

The extra stretching results in a more aggressive rotation at the end of the kick, so it’s really important to control it to keep balance and control of our position. Despite this, it is a very effective kicking technique.

What is the roundhouse kick?

The roundhouse kick is the most basic movement out of the three. It works similarly, but in this case, you don’t need to lift your knee upfront before kicking.

In this technique the leg moves more like a baseball bat, swinging from behind in a straight line, so it doesn’t make any sudden direction changes.

It’s one of the first resources you’ll learn to use in almost any combat sport.

Pros of the roundhouse kick

Since the kicking leg covers a longer trajectory, it can build more momentum resulting in a more powerful movement

It also allows us to hit with the shin, which is a much stronger part of the body, instead of the feet

This kicking motion also means that it is a faster and more direct kick.

Cons of the roundhouse kick

The power and straightforward nature of the roundhouse kick make it easier to predict, unlike the previously mentioned kicks.