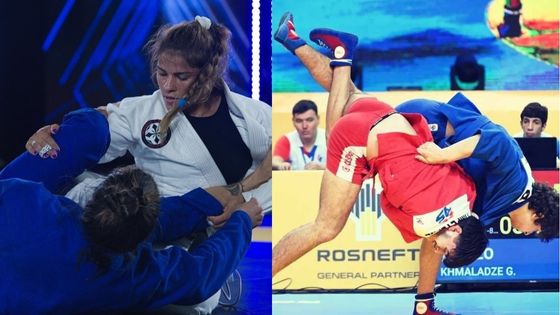 Since the coming of Khabib Nurmagomedov to the UFC in 2012, a huge debate sparked about which discipline is better, Brazilian jiu jitsu or sambo.

Khabib even dared to challenge the Brazilian jiu jitsu community by wearing a t-shirt saying “If Sambo was easy, it would be called Jiu-jitsu”.

Khabib’s T-shirt enraged the jiu jitsu community, and many videos and blogs started weighing the pros and cons of each discipline.

My only problem with these comparisons is that they compare apples and oranges without stating the objective of the comparison.

The comparison should instead be made for a purpose, like:

Which discipline is better for self-defense?

Which discipline is better for MMA?

Which discipline is better for ground defense (bottom game)?

Which discipline is better for ground offense (top game)?

In this article, we will make a comparison to see which discipline is better for MMA

Sambo is more dynamic, jiu jitsu is a bit slower

Jiu jitsu is often compared to a chess game, it is based on thinking, tactics and strategies. Also, it is based majorly on leverage instead of force.

The work of a jiu jitsu player is often compared to what an anaconda does, the way it holds its prey, slowly but surely until the prey is strangled.

On the other hand, sambo was inspired by wrestling and judo. These two arts are both very explosive and rely a lot on strength and explosive power.

A judo throw or a double leg takedown should be technically well applied, but also if there is no explosive force behind it, it will not be successful.

So we have two sports, both technical, but have different philosophies, one relies on tactics and strategies like in a chess match, and the other relies on power and strength alongside technique.

For offense, sambo is better, hands down.

If you want to take down your opponent and maul them as Khabib or Makhachev do their opponents, then sambo is your best bet.

Sambo has a unique way of attacking, it is relentless and aggressive.

It is ideal for controlling the opponent and staying on top.

The techniques that Khabib used in his fights, such as The Dagestani handcuffs and the leg control, all come from sambo.

Let’s say you are facing a wrestler who you know for sure is going to take you down. In this case, Brazilian jiu jitsu is going to be your best bet.

Brazilian jiu jitsu was mainly designed to face wrestlers who are bigger and stronger, the majority of its strategies are based on being on one’s back.

A sharp guard game would make your opponent afraid to follow you to the ground.

They all knocked him down at least once, but none of them dared to follow him to the ground and finish him.

Why? Simply because they were afraid of his guard game!

His Jiu jitsu mastery bought him time to recover and come back and win.