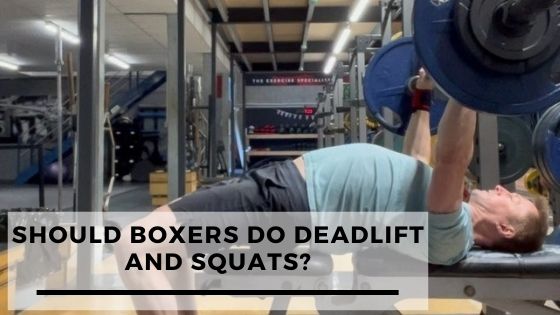 In one of our previous articles, we talked about weight and strength training for boxers and some of its advantages.

We also talked about some of the exercises that could be used during strength training, and this was where using deadlifts came up.

In essence, we thought; why don’t we delve into two of the most important strength and weight exercises.

The deadlifts and The Squats

A deadlift occurs when an individual lifts a loaded bar off the ground to the level of his/her hips.

It requires a lot of force as it targets the back muscles, the gluteus maximus(hips), the hamstring, the lats, and other areas of the back.

Squats are a little different in the sense that, the loaded bar is placed on the person’s shoulder, and he has to squat and go up repeatedly.

Without the bar, the exercise targets more of the lower body, but with a bar being used, there is more of an effect on the entire body.

Similarly to the deadlifts, squats targets the gluteus maximus, the hamstring, the Erector spinae, and other areas of the lower body.

Now that we know what they’re about, the next question is.

How are they important to a Boxer?

The lats muscles are present on either side of the back and are used for transferring power from the legs to the arms.

They act as channels

For any boxer, the ability to hit hard is one of the most important instruments (take Mike Tyson and Deontay Wilder for instance), so if the lats aren’t properly strengthened, the power in your punches becomes diminished.

Strengthens the legs and hips

As we said earlier, the ability to hit hard comes from the legs.

The posture of the legs, and how firm they are on the ground play the most crucial factor in how much power a boxer can generate.

This is where the squats come in, the exercise primarily focuses on the lower body and the muscles within it.

Both exercises require a high level of explosiveness to be executed properly, and once you can get used to this, then doing it on fight night becomes easier.

Many a time, we’ve heard reports and excuses from fighters that they got injured mid-fight, which is why they lost.

Whether these excuses are valid isn’t the point, the fact remains that boxers who add deadlifts and squats to their training regimes have a lower chance of suffering injuries in the middle of a fight.

This is because their muscles are already conditioned.

To round up, we would like to re-emphasise that both the squats and deadlifts are physically demanding exercises, and regardless of their numerous benefits, overdoing it could have adverse effects.

Lifting too heavy could very easily lead to muscle tear or sprain, even bone fractures.

There is also the fact that weight training could leave the athlete very sore, and he/she may not be able to perform his or other workouts effectively.

So everything must be done moderately, to maximise the benefits of the exercise, and minimise the potential effects.