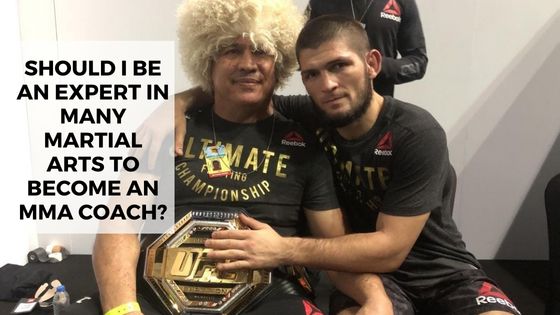 The best coaches in MMA aren’t experts in many martial arts, you don’t have to be a black belt in 2 or 3 martial arts to be a coach in MMA.

Here are some examples of the best coaches in MMA who have expertise in only one discipline (like most top MMA coaches):

He is a former ISKA kickboxing World Champion, he started as a kickboxing coach and then converted into an MMA coach.

Coach Javier Mendez never competed in wrestling or jiu jitsu and doesn’t have any expertise in any of these disciplines.

It is worth mentioning that American Kickboxing Academy is known to be the gym that has the best MMA wrestlers (Khabib Nurmagomedov, Daniel Cormier, Cain Velasquez, Islam Makhachev, etc.)

Jon Jones’ coach Greg Jackson is one of the best MMA trainers in the United States.

Greg Jackson comes from a wrestling background and never competed in any striking sport.

He teamed up with the striking coach Mike Winkeljohn and created Jackson Wink MMA Academy.

Trevor Wittman was originally a boxer, then a boxing trainer, and later he converted into an MMA trainer.

Trevor Wittman never had any experience in jiu jitsu or wrestling.

Mark Henry was a boxing coach and, believe it or not, was also a restaurant chef.

He later converted into an MMA coach when he met his son’s wrestling coach, who was none other than Franky Edgar, former lightweight UFC champion.

If you want to be an MMA coach in a commercial gym teaching amateurs and kids, then being an expert at one martial art and being average at other martial arts would be sufficient.

On the other hand, if you want to train fighters to compete, then that is a completely different topic.

If you are the head coach of your gym, you will need specialized coaches for every discipline, and your job as a head coach is to set the strategies and the tactics for your fighters according to their upcoming opponent.

Your job also as a head MMA coach is to watch film about your fighter’s opponent and analyze them, and come up with plans.